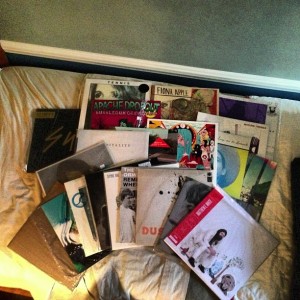 As always, my year-end list comes with a disclaimer. I hate rankings in art, period. End of story. This is an exercise in figuring out which albums meant the most to me in 2012. Nothing more. Nothing less. Those interested may subscribe to my Best of 2012 Spotify playlist, but I strongly urge you all to go out and purchase these releases. They are all worthy of your buck.

Several trends have developed as I look back on my favorite releases from 2012. First, I lean heavier towards releases from the latter half of the year. This is unintentional, but it’s just a reality of what I’ve been listening to lately and what is on my mind. Time will tell whether these releases continue to have staying power. 2012 was a really strong year for singer-songwriters and debut releases. Of the 30 albums on this list, eight are debuts with four ranking in the top 10. I am heavy on the folk this year with Barna Howard, Jessica Pratt, and Hip Hatchet all receiving nods. It was also a good year for EP’s and I decided to expand this list from full-length album’s to include releases from Bear Hands, Daniel Rossen and The Antlers.

2012 was also a great year for hip hop, which my list does not reflect. I enjoyed a lot of material that John Bugbee covered for Thought on Tracks this year, with billy woods’ History Will Absolve Me and Ka’s Grief Pedigree ranking near the top. Unfortunately, I gave most of these releases cursory listens and didn’t feel comfortable including them on my list. It’s possible that we’ll create another list that takes into account the entire staff’s picks, in which case hip hop would likely be included.

A note on number one: I chose Dirty Projetors’ Swing Lo Magellan as my top album of the year. In reality, any of the albums in my top five could rotate into that position. For me, the Projectors album was the one release that I could say definitively felt like it was moving the possibilities of pop music forward. Much of that has to do with the album’s inherent and intentional cerebral quality. I believe David Longstreth is the closest artist that my generation has to Brian Wilson in terms of executing a vision and creating other-worldly vocal arrangements. In honor of Swing Lo earning the top spot, feel free to check out the short film for “Hi Custodian” from Pitchfork.tv featured in all of its pretentious glory at the bottom of the post.

Below, you’ll find my list with links to any of the albums that we covered this year. I really think there is something for everyone on this list. It’s been another great year for music, and I hope that you’ve enjoyed some of what we talked about this year. Thanks as always for reading. And thanks to the incredible minds that created the artwork listed below. Without it, I honestly don’t know whether I’d get out of bed in the morning. It really means the world to me.