Fresh Track: Twerps “Work it Out” 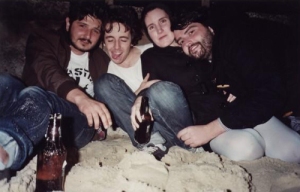 Australia’s Twerps fantastic self-titled debut from late 2011 remains one of the most underrated works of the past few years.  After touring all summer with fellow guitar-centric indie rockers Real Estate, the band made a quick trip back to the studio with the results hitting your local record store’s shelves later this month on November 19th.  The 7” release features A-side “Work It Out” along with B-siders “He’s In Stock” and “Recall”.  Those summer days spent lounging around with the kings of the jangly guitar, Real Estate, seem to have rubbed off even more on the Aussies as “Work It Out” is a poppy, guitar-driven treat.  While the lyrics aren’t exactly based on the happiest of subject matters, the drum beat and guitar are more than enough good vibes for an afternoon cruise.  You can check it out below along with “He’s In Stock”.  If you like what you hear, you can pre-order your copy via Passport Label today.