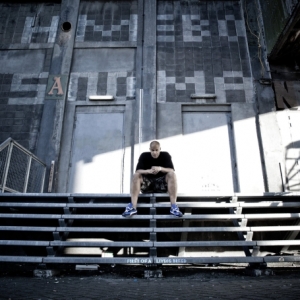 To say that New York rapper Homeboy Sandman has an unconventional approach to making hip hop would be an understatement. While Sandman has a style that has been lauded by mid ‘90’s rap enthusiasts, that’s more to do with his intricate flow and strong New York accent than the actual content of his music. Homeboy Sandman’s unique rap journey truly began when he withdrew from Hofstra Law School three years in to pursue a career in rap, so you can see why his perspective might be a little different from your typical rapper. For Homeboy Sandman it’s a conscious decision to make unique and original music, even flipping the popular rap cliché ‘last of a dying breed’ on its head for the title of his new LP First of a Living Breed.

The album is Sandman’s first full length offering since signing a deal with Peanut Butter Wolf’s west coast label Stones Throw. He released two excellent EP’s earlier this year (Subject Matter and Chimera), and a song from each is featured on First of a Living Breed. “Mine All Mine” from Subject Matter and “Illuminati” from Chimera are perfect examples of Sandman’s versatility and it’s easy to see why they were chosen to be featured on the LP. “Mine All Mine” is as straightforward a hip hop song as Homeboy Sandman will make, but his rapid fire delivery and sharp wordplay (“my roots underground like veggies”) make it a creative and fun take on your traditional rapping-about-yourself song. “Illuminati” on the other hand finds Sandman showing off his conceptual side penning a song from the perspective of a ruling class that is casually detailing strategies to keep the underclass in their place and predicting the desired outcome. Sandman’s brilliant writing shines throughout the song, but especially in the last few bars- “They will never form alliance they’ll be content to live a lie/ as long as they’re alive the sirs and madams will surmise/ that it’s on us they rely they will never realize that we rely on them/ at any moment they decide they could make it end/ instead just make some ends because life is hopeless times is hard/ and keep it focused on religion so they never look for God”.

“Illuminati” is a great example of Homeboy Sandman’s ability to think critically in the political and government realms, but on the album’s high point “Whatcu Want from Me?” he makes it known that that world is something he’s trying to avoid- “All them politicians are frauds and just an awful lot/ Coughing up they mouthful but they never do an awful lot/ If it was up to me I’d throw all them suckas off the docks/ I don’t give a damn if my opinion is unorthodox” Later on the same song Sandman shows off his DOOM influenced pop-culture associative flow- “Maybe I’m like Pee Wee looking for the Alamo/ All I know is it’s in fashion treating my fam like animals/ And that ain’t gonna stop regardless of who’s dating Amber Rose”. Homeboy Sand’s rhythmic flow and breath control are enough to grab any casual listeners attention, but once you start to break down his bars you quickly realize he doesn’t leave much room (if any) for filler.

A song like “Couple Bars” might sound like a typical song for the ladies at first, but the concept behind the song and Homeboy Sandman’s craftsmanship make the song something much greater than that. In an interview with Village Voice Sandman revealed that the song was based on and written following a dream he had about singer Nikki Jean after they met at South by Southwest a couple years ago. On the song Homeboy Sand pokes fun at his political indifference and makes great use of metaphors, matching the songs imagined inspiration- “Baby run for prez, I’ll vote/ I’m fearless from the feelings you evoke/ Okey dokey you can open up my nose/ I’ll never put you second for a second, you’re no Robinson Cano/ I don’t know if you’re into sports but I am hoping so”.

Although Homeboy Sandman puts forth a lot of effort to differentiate himself from typical rappers, he usually finds a way to do it while maintaining his overwhelmingly positive perspective. The ‘same as it ever was’ track “Not Really” has Sandman rapping about his no frills approach to life which has allowed him to stay grounded regardless of how much money or fame is gained. Sandman raps- “Far as money I was always out/ Now it’s always money coming in/ I never worry about money now/ I never worried about money then”. Instead of trashing the “get money” rap mantra, Homeboy Sandman simply offers another perspective, his. Homeboy Sandman’s honesty is always appreciated because even when it’s off the cuff, it seems well thought out and grounded.

Along with other albums released in 2012 like billy woods’ History Will Absolve Me, Open Mike Eagle’s 4NML HSPTL, and Aesop Rock’s Skelethon, First of a Living Breed is a fully grown album for a fully grown rap audience. Maybe even more so than those three albums it possesses the ability to captivate even a casual listener because of Homeboy Sandman’s undeniable rapping talent and sense of melody. Despite signing with Stones Throw, Homeboy Sandman hasn’t rhymed over a single beat from their in-house maestro Madlib (the title track was produced my Madlib’s brother Oh No), but it hasn’t seemed to affect Sandman. He’s shown a great ear for beats, enlisting several no-name producers for all of his recent releases while still maintaining a cohesive sound that never finds him sounding uncomfortable. Homeboy Sandman has also earned a rep as one of the best live performers in hip hop over the last few years and his effortless flow is on full display throughout the album. Pick up Homeboy Sandman’s new LP over at Stones Throw Records and find out why he’s a strong contender for my rapper of the year for 2012.