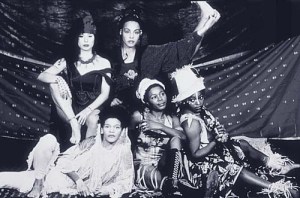 Zap Mama is a musical group that was founded in 1989 by Belgian and Congolese singer Marie Daulne. The group has released seven albums that span a vast array of genres, touching upon West African vocal arrangements and Western European and American R&B, jazz and hip hop. Daulne’s Zap Mama has taken on several forms since its inception, but none has achieved the critical acclaim of the original A Capella quintet featured on her 1993 debut Adventures in Afropea 1.

The record was initially released in Europe as a self-titled LP, before being reissued stateside as Adventures in Afropea 1 on David Byrne’s Luaka Bop Records. By the end of 1993, the album was Billboard’s top-seller in the “world music” genre. Adventures in Afropea 1 and follow-up Sabsylma draw most directly from the pygmy harmonies found in Daulne’s West-African roots. Though Zap Mama’s fame is relatively limited in terms of mass audience, the project’s influence continues to be felt in the vocal stylings of artists like Merrill Garbus of tUnE-yArDs and Kristin Newborn of KO.

The video clip found below is taken from Zap Mama’s 1997 appearance on the short-lived PBS musical variety show Sessions at West 54th. The song “Abadou” is featured on Adventures in Afropea 1.