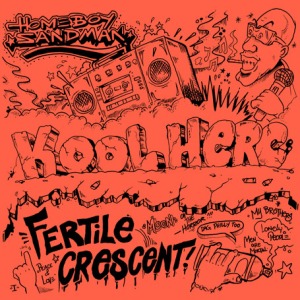 New York MC Homeboy Sandman had one of my favorite albums of 2012 in First of a Living Breed. It was his first full length album on LA’s famed hip hop imprint Stones Throw Records, following two outstanding EPs (Subject Matter and Chimera) that were also released on Stones Throw in 2012.  Sandman’s forging a similar path in 2013 with his initial release, Kool Herc: Fertile Crescent, also coming in the form of an EP.

Fertile Crescent was released digitally a couple months ago, so it’s not technically a new release, but I decided to hold off on reviewing it until it got a proper vinyl release this month.  After listening to Fertile Crescent for the past couple of months, I can definitively say that is his most consistent release and my favorite Homeboy Sandman project.  That’s saying a lot considering the numerous projects he has released in the last five years, but it’s not surprising considering his ability to constantly improve and reinvent himself.

In terms of rapping chops, Sandman has been one of the best MC’s on the planet ever since his first album dropped back in ’08.  His writing, flow, wordplay, and creativity have been consistently excellent on each and every project he’s released.  Conversely, his advanced writing and ability to tackle topics that other MC’s wouldn’t touch have limited the cohesiveness of past works.  You always know you’re going to hear a few songs on a Sandman album that are utterly unique, but this uniqueness (both in his beat selection and songwriting) sometimes makes his albums tough to listen to straight through.

That is not the case on this EP, and it is largely due to the excellent front to back production provided by EL RTNC.  EL RTNC has made a handful of beats for Homeboy Sandman over the last couple years and while he may not be a household name at this point, I predict he won’t be staying anonymous for long.  All of the beats seem to draw from a 70’s rock/soul template and feel connected, but they never run together.  This is helped by the fact that EL RTNC adds short intro and outro beats and samples throughout the EP that raise the level of musicality and cohesiveness.

“Peace & Love” stands out with some of the best songwriting you’ll find on a rap song in 2013.  His verse about how easily strong relationships can crumble alternates with a great vocal sample and Sandman builds on the verse with every pass through, giving the verse a chorus-like feel and helping to burn it into your memory.  Homeboy Sandman has always been more adventurous with his song structures than the average rapper, but it’s these types of songs that really put him at the forefront of the genre as a songwriter.

It’s hard to single out any other songs on an EP that’s so consistently good, but Homeboy Sandman’s creativity shines through on every song.  He breaks down stereotypes he faces daily and sings in Spanish on “Oh, The Horror,” shows off his acrobatic, wordplay driven flow on “Dag, Philly Too” and “Men Are Mortal”, and details the dangers of dating someone and hoping they’ll change on “Moon.”  Kool Herc: Fertile Crescent is the best EP I’ve heard this year and a tremendous start to what should be another great year for Homeboy Sandman.  He recently released another excellent single, “Give You The World” and has a full length project scheduled to drop later this year.  Pick up the vinyl for Kool Herc: Fertile Crescent for only 9.99 over at Stones Throw and get an instant digital download.