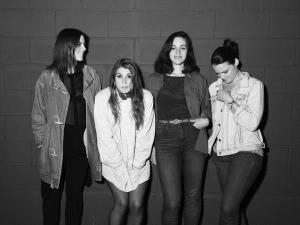 Were the world a rational place, 2012 might very well have been a dark year for Teeny Lieberson. Since her departure, longtime Radiohead producer Nigel Godrich has taken Lieberson’s former band, Here We Go Magic, under his wing. Under his guidance, the band released its most critically acclaimed album to date in the form of A Different Ship. Fortunately for listeners, logic is a rare bird in this world of ours. Rather than wallow in what might have been, we find Lieberson fast at work on her aptly titled female group TEEN.

Brooklyn-based TEEN features  Lieberson’s sisters Katherine and Lizzie on percussion and keys respectively, along with longtime friend Jane Herships on bass and Maia Ibar on drums. Each member of the band sings, and they sing well. Last year, TEEN independently released a four-track EP entitled little doods. The debut kicks off with the catchy hook of “Cannibal”, featured below.  Though I’m just as smitten with the sleepy, scorned love of “Just Another” and rattling, lo-fi drone of closing track “Ocean Pearl.”

Since releasing little doods, TEEN has spent the better part of the last year carving out an identity. They have shared the stage with Thought on Tracks favorites Caveman, Gauntlet Hair and Purity Ring among others. On August 28, TEEN will release its debut full-length In Limbo on Carpark Records. The label recently dropped the album’s first single “Better”.  Listen to the .mp3 here, and watch the video via PAPERMAG.  The video features footage from the Kevin Bacon classic Quicksilver and is not to be missed.

Still unconvinced? If you manage to sit through “Come Back” from the Secret Garden video session featured below without immediately transforming into a staunch TEEN supporter, then I give up. The video features four previously unreleased songs, including the title track from the forthcoming LP. When you’ve got a few minutes, click play and refrain from averting your eyes until completion. You will not finish disappointed. If I’m wrong, feel free to call me an asshole in the comment section beneath the post.