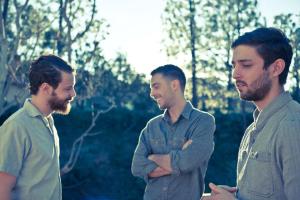 Los Angeles four-piece PAPA is a band that I have been unable to put down the last few weeks. My buddy Scott Watson from The Fridge offered the introduction via their stunning cover of Nick Lowe’s “(I love the sound of) Breaking Glass.” This proved an apt starting point, as Lowe’s records have remained in frequent rotation since I caught the singer-songwriter’s set in support of Wilco last year in Indianapolis. PAPA sticks to the script, but why fuck with such a delicious pop groove anyway?

PAPA recently wrapped up a month-long stint at The Echo on Sunset Blvd. Last week, Daytrotter dropped their SXSW session, which also features the cover of “Breaking Glass.”  To say that PAPA is gaining traction amongst the independent music scene is an understatement. Thus far, it appears warranted. The band released their addictive debut EP A Good Woman is Hard to Find last October. The five tracks prove a cohesive batch of vintage pop, with Darren Weiss crooning and keeping time at the heart of it all. Listen to “Collector”

Somewhat of a rhetorical question here, but can anyone name a drummer/singer that is not a complete and utter badass? I’m sure my memory is selective towards the talented, so feel free to shatter this theory in the comment box.  Rest assured, Weiss is one of the good ones. On the surface, PAPA offers concise songs featuring bright guitar flourishes and familiar key changes on piano. Just beneath, Weiss paints these vignettes of ordinary characters wrestling with the same pangs of love, self-doubt and uncertainty of the future that plague the rest us. Even those moments of chaotic, internal rage when we just want to scream, as Weiss does at the end of “Collector”, “I JUST WANT IT TO BE QUIET NOW!” It’s at these moments, when Weiss unearths a bit of humanity that PAPA’s sound elevates beyond an ordinary pop quartet. Watch their video of “Breaking Glass” below.