Video: Dreamers of the Ghetto “Connection” 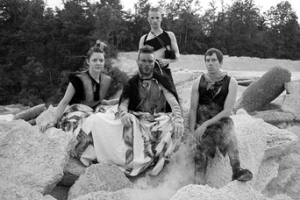 Dreamers of the Ghetto were one of 2011’s new artists that have helped to place some national eyes on their hometown of Indianapolis. Following a favorable review of their album Enemy/Lover in Pitchfork last year, the band hit the road. By the end of the year they had played Shea Stadium. Critics have universally concurred that their sound has the potential to fill arenas, and I will not stake an argument against it. I was fortunate enough to be on hand at LUNA music with a handful of others to see their window rattling in-store performance last summer. The band has a handful of Midwest shows scheduled for February. Stop by your local record shack to scoop a copy of their album and “Tether” / “Heavy Love” 7″. They do not disappoint. Watch their latest video for the song “Connection” below.