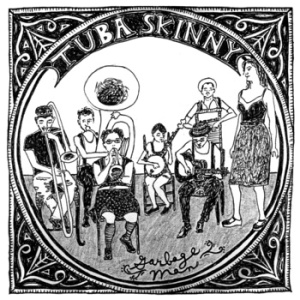 Every listener has their soft spots. Certain sounds, when stroked, squealed or sung in a particular manner, do it every time. We can safely rely upon these sounds, like the best comfort foods, to guide us through an ugly break-up or a string of shitty luck. We bring other sounds out for celebrations, to ease a hangover or complement a good buzz.

For several years now, the succulent songs of the Crescent City have remained my auditory comfort food of choice. I am particularly taken with the post Professor Longhair era of New Orleans, featuring artists like Lee Dorsey, Ernie K-Doe, Dave Bartholomew, Allen Toussaint, Irma Thomas, Benny Spellman and others. Together, these musicians accounted for a golden era of soul and funk rivaled only by Detroit’s Motown and Chicago’s Chess Records.

Tuba Skinny harkens back to an earlier era in N’awlins. The one that the city is arguably most famous for: dixieland. On their January release Garbage Man, the six-piece band sends listeners on a tour through 1920s-30s blues and jazz. Since they formed on the streets of New Orleans in 2009, Tuba Skinny has managed to revisit this era in a way that never feels stale or played out like their counterparts the Preservation Hall Jazz Band can sound at times.

Stream Garbage Man in its entirety below. Purchase the album for $10 HERE.