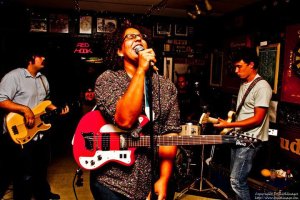 The Alabama Shakes will be playing at Radio Radio on Wednesday, December 14th. Tickets are $10. I suggest you act swiftly Indianapolis, as this will likely be the last time you will ever have the chance to see this band for such a moderate price. And it’s sure as shit the last time you’ll ever see them in a venue as small and intimate as Fountain Square’s Radio Radio.

This Athens, AL quartet is winning over crowds all over the country of late. Their performance at Jack White’s Third Man Records during Next Big Nashville’s Soundland music festival in September was a consensus critic favorite. A couple of weeks ago, they followed suit by knocking the socks off of a packed Bowery Ballroom as part of CMJ Music Marathon in NYC. The New York Times’ Jon Pareles had this to say:

“But some of CMJ’s best moments this year looked even further back: toward roots-rock, far away from laptops, concepts and surface cleverness. The Texas bluesman Gary Clark Jr. played sets that were simply incendiary, following bleak sentiments with slashing guitar solos. And a band called Alabama Shakes, led by a bespectacled songwriter and guitarist, Brittany Howard, harked back to the fervor and smoldering drama of 1960s Southern soul and left its audience screaming for more. They were working CMJ the old-fashioned way: making converts with sheer live impact, now letting the Internet multiply the word of mouth.”

Pareles drives home the point that this band is beyond buzzworthy. This is whiskey drenched, headboard rattling, soulful rock n’ roll. Watch below for evidence. The top video was recorded at Pegasus Records as part of the Live from the Shoals video series. Watch “Hold On”:

Below is a music video for the song “You Ain’t Alone” featuring footage from The Alabama Shakes’ performance at Chattanooga’s Track 29. The video was directed by Joshua Shoemaker. Both songs are featured on the band’s debut self-titled EP: Album Stream – Alabama Shakes. Do not sleep on this show Indianapolis. Get to Fountain Square on December 14th or risk kicking yourself come Christmas.