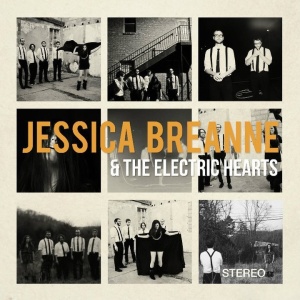 Those that know me well and have any grasp of my musical tastes should understand that there exist several sure-fire paths to my heart. Horn sections – love them. Soulful songwriting: I need an emotional investment from the artist. Strong vocals, not a must, but I tend to gravitate toward great singing. I am a bonafide sucker for bands fronted by a chicks, New Orleans piano players, anything from the Motown label, and slide-blues guitar.

The debut, self-titled release from Nashville’s Jessica Breanne & The Electric Hearts has many of the ingredients from the aforementioned list – in spades. The album showcases Breanne’s strengths as a songwriter, touching on a variety of genres without ever feeling lost or falling flat. Her vocals remind me of a cheerier Alison Mosshart or an edgier Susan Tedeschi.

The Electric Hearts provide an accessible, classic soul foundation for Breanne to build from. Their guitar play has enough of an edge to keep things interesting, at times mimicking Dan Auerbach to a dangerous degree. But I can’t say I’m mad about it. This album is guaranteed to liven up one of your parents’ lame dinner parties without inviting any dirty looks from an older guest list.

The album is solid top to bottom. Don’t miss the cover of Bon Iver’s “Flume.” The band pulls it off without abandoning the soulful simplicity that drives the rest of the disc. Stream the entire album below and pick it up for $10 via bandcamp.