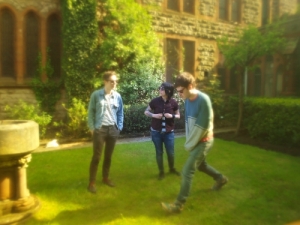 Back in June, I featured Belfast’s Girls Names’ most recent single “A Troubled See” as a track worth your attention.  Late last week, the group released another single entitled “The New Life” which officially pushes their next album into my own personal “most anticipated” category.  Clocking in at 7:35, the single is a sprawling cacophony of reverb and dreary vocals to go along with a mesmerizing beat.  But despite its length and that description, there is plenty of great things going on here that are sure to translate even more into a live set.  Hopefully a lengthy tour including stops in the Midwest is in the works after the follow up to 2011’s Dead To Me is officially released.  You can preorder the 12” featuring this track and a J D Twitch Optimo remix from Slumberland Records.  Cheers and enjoy friends.

Jacob Graham of The Drums was quoted to saying “If reverb didn’t exist, we wouldn’t have bothered trying to start a band.”  There’s something about this style that has always had a therapeutic effect for anyone that dives headfirst into it.  The word itself, reverberation, implies the persistence of sound after the original sound is produced.  In it’s truest essence, it is the ability of sound to continually fill a space.  And perhaps that what it is really doing; filling not only the empty spaces in a room but also the empty spaces inside the listener.  Whether it is insecurity in the present, a longing for the past, or uncertain thinking about the future, the root cause is always that something is missing.  And it’s different for everyone.  There is no rating for personal tragedy and feelings between people.  Heartbreak is the same, no matter the cause.  And perhaps that’s why the music is so compelling and rewarding, the fact that when you drown in the sound, you know deep down that you are connected to someone else doing the exact same thing.  Loneliness is only absolute if you lose your ability to think about others.

I believe in connectedness.  Friendships and relationships are decided far before a first meeting takes place.  But I also believe in choice.  Life may put you in the same room as someone, but ultimately, action is required to push that connectedness into whatever it is meant to become.  So how is it that these are my thoughts at the end of a holiday weekend, when the majority of us are hungover and sun burnt?  I’m not really sure to be honest; sometimes I guess I just think about things.  The only thing I know for sure is I’ve been listening to True, Violens’ follow up to 2010’s Amoral, for the past few hours.

A heavy dose of dreamy reverb along with a mix in of garage grungy undertones, the album strikes a cord with my emotional core in just the right way.  From the first wavy guitar chords on opening track “Totally True”, the album has an inviting sound that retains balance throughout.  The opening track lets the sound tell the meaning, offering a simple chorus that doesn’t need any more words.  “True.  I want to know that you’re true.”

The first quarter of the album, which includes tracks “Der Microarc”, “When to Let Go” and “Sariza Spring”, all display the easy listening style perfected on the opener.  They flow seamlessly from one to the next, so much so that you might not even notice them changing.  Then on track 5, “Every Melting Degree”, a garage/grunge rock style is implemented as an undertow to the wave of echoed reverb.  This aggressive guitar carries through the next few tracks, “Unfolding Black Wings” and “All Night Low”.  While no longer light and airy, this change of pace works and is perfectly placed in the middle of the 12-track album.

But perhaps the most impressively crafted song on the album is the second to last track entitled “Through the Window”.  Speaking so much with hardly a change in tone or beat and ending just as quickly as it starts with the music literally dropping off, it represents this album in a nutshell.  True is not an album of anthems or lead singles.  It’s an album of yin and yang.  Balance and wholeness.  Thoughtfulness and melancholia.  And it needs to get into your rotation sooner than later. Grab your copy from Slumberland Records, and listen to “Through the Window” below. 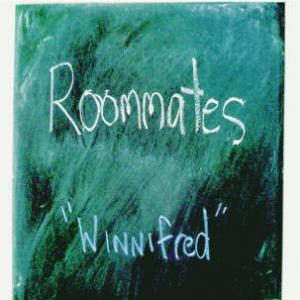 The story is too good to not be shared with the loyal readers of Thought on Tracks.  I also think it might be fair to say that the music is even better.  A rich, illicit tale of how a mix of substance, shared living space, and musical talent can lead to a blog post.  Step inside and meet Roommates.

Ben Cook (Fucked Up, Marvelous Darlings, The Bitters) had been sharing the same apartment with friend Mark Fosco (Marvelous Darlings) for nearly four years when one exchange occurred that brings us all together to today.  Fosco was working a deli job when he traded a sandwich (not sure the cut of meat) for an illicit substance from a customer.  Being a good friend, Fosco offered the drugs to Cook and the rest is history.  Two mind erasing sessions lead to release of  7” Winnifred by Oakland label Slumberland Records.

Roommates did not originally intend to release these experiences or even be considered a band.  The duo has played a hand full of shows in a Toronto coffee shop called “One Stop Sandwich & Coffee” and it is tough to say if we will ever hear anything more from this project.  A powerful mix of heavy guitar and great pop lyrics has me hoping that there is more to come.  If the music slows then it might be time to start interviewing hungry Canadian drug addicts with negotiating skills.

Listen to the front side of Winnifred and enjoy “Back to the Sun / Girlfriend Swamp”. Grab your copy for $4.75.