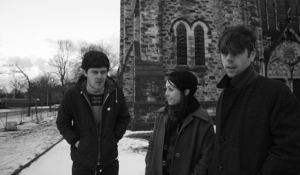 Belfast’s Girls Names will be releasing their first single since last year’s debut LP Dead to Me. The b-side will feature a single from fellow Tough Love Records labelmate Weird Dreams.  The former trio and current quartet expands on their blend of reverb-heavy garage/surf/pop fun with “A Troubled See” by displaying more polished songwriting and arrangement.  Whereas several of the songs on Dead To Me drag to depressingly into psychedelia, this track features a bit more liveliness and enthusiasm.  Girls Names recently announced via Facebook that they will soon head into the studio to begin working on their sophomore LP.  Hopefully the group’s sound continues to develop and, with a bit of luck, we hear a new album before the end of the year.  Scope the track below and pre-order your limited edition (1/300) pressing.