Oregon’s Typhoon is a band that I’ve favored since the release of their terrific 2010 LP Hunger and Thirst. The 13-piece band is independent folk rock’s modern take on parlour music. Parlour music rose in popularity in middle class homes across America during the latter half of the 19th century, charactarized by multiple musicians playing harmonically independent melodies. As instruments and printed sheet music became readily available, locals would gather within the home to perform with whomever was available. For Typhoon and their new record White Lighter, a house in Pendarvis Farm in Oregon’s Happy Valley served as the parlor of choice. Read the band’s June interview with Rip City Review for a glimpse into their recording process.

White Lighter is due out in early 2013, but those seeking an early taste may pre-order a 7″ of the album’s first single “Common Sentiments.” The single drops on October 29. Pressed on Tender Loving Empire, the release is limited to just 200 copies and features a b-side of the track “Green.” Listen to “Common Sentiments” below, and keep your eyes peeled for White Lighter early next year. 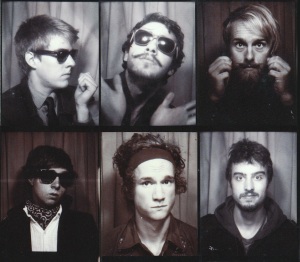 Adventure Galley is a six piece synth-pop band out of Portland, Oregon.  Their sound is very much in the mold of Future Islands and The Killers with a dash of Cold Cave and P.C. (Pre-Congratulations) MGMT in which heavy synths build up danceable pop music.  What sticks out most about the band is an almost monotone vocal in each of their songs that somehow strangely still resonates as emotional.  Adventure Galley’s first hit track was the infectous pop jam “Addict” which was originally released in 2010 on the band’s first EP entitled The Right Place To Be.  A remastered version of the track will be included on an upcoming album scheduled to drop this year along with two new tracks, “Marooned” and “Weekend Lovers”, which were released for preview earlier this month.

Of the two, “Marooned” sticks out the most and speaks to the potential of the band.  While “Weekend Lovers” falls more in line with “Addict” in an upbeat, windows down pop music vane, “Marooned” brings a darker, more intriguing vibe to it.  Like 95% of pop music, it deals with a relationship that’s gone wrong and reminds me of a recent someone who fleetingly passed through my own life.  There is no feeling of wanting to reconcile, only a strong sense of betrayal and anger over something that’s beyond repair for unexplainable reasons.  As human beings, we tend to understand absolutes but live our own lives in the ambiguity of our emotions, clinging to past ideas and experiences of what we think we have and deserve.  Letting go is just too hard.  But when the end arrives and neither believes the face in the mirror to be at fault, someone ultimately has to supply closure, with the most pained usually being the person to do so.

Marooned on an island

In love with a bullet and a gun

She claims that the temperature has nothing to do with it

It’s not her fault

The bullet is mine

Careful what you wish for

Both tracks show a lot of promise and certainly make Adventure Galley a band to keep your eye on in 2012.  While no album release date has been scheduled, as of yet, you’ll have to live with the preview of these two new songs, which we have below.  Enjoy discovering and please, don’t forget to share. 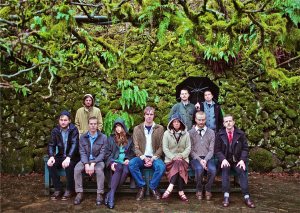 One of my favorite emerging acts of 2011 has proven to be Typhoon. My infatuation began after NPR featured the band in a breathtaking Tiny Desk Concert from South by Southwest (SXSW) in January. How the NPR staff managed to refrain from belting out a bellowing yell when they pick up the pace in “The Honest Truth” is completely beyond me.

Typhoon is unique for several reasons. Their performances often include over a dozen musicians. The format harkens back to late 19th century parlor music, when neighbors would gather around the living room sharing in song. It reminds me of grade school music class. Only, this group never dissolves into an incoherent, cluster fuck of noise.

Their 2011 EP A New Kind of House represents the first breakthrough for Portland, OR label Tender Loving Empire. Fronted by lead singer and guitarist Kyle Morton, Typhoon proves that several whispers combine into a collective roar. Though the individual parts are rather simple, the group’s timing and delivery is complex and sophisticated.

I was blown away when I saw Typhoon’s Lollapalooza after show at Subterranean in Chicago. A big thanks is owed to whoever is financing this project. In the age of stolen music, it seems unfathomable that a band of this size can exist. I look forward to following them in the years ahead. Chances are, they will never be short on ideas with that many minds in the room.