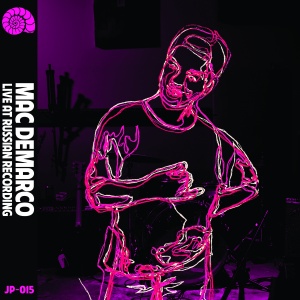 Last month, Brett and I made a Sunday voyage to Bloomington to see Montreal’s Mac Demarco. His 2012 LP II was one of our favorite releases of the year. I had caught Demarco a couple of times earlier this spring at SXSW, so I was aware of his ability to transcend his brand of mellow, melodic pop into a dynamic live set. This knowledge coupled with the promise of Russian Recording‘s intimate performance space made this Sunday retreat mandatory.

Earlier that day, Demarco had played an afternoon set in the sweltering heat of Bonnaroo, only to pack up his gear and travel directly into the welcoming arms of Indiana’s lone bastion of liberalism. Due to the tight turnaround, Demarco’s set kept getting pushed back. Eight o’clock turned to nine, turned to 10, which turned to 11. Though we remained hopeful that Demarco would show, it was a toss-up as to his energy level for the set. Would he be wiped from the festival and break-neck drive? Or, would he muster his strength and deliver a set on par with buoyant, charismatic performances that I caught in Austin?

Fortunately, for the several dozen bodies sandwiched into an over-sold Russian Recording, Demarco delivered. Fortunately, for those unable to attend, Jurassic Pop Records announced it will release the recordings as a limited edition (200 copies) live cassette. Those interested should act fast, as these are likely to fly off the shelves. Demarco delivered a set that featured highlights from his studio releases II and Rock and Roll Nightclub. He also stretched his standard pair of cover songs into an otherworldly, 10-minute medley that culminated in a rockin’ rendition of Neil Young’s “Unknown Legend” and made up for any lost time on the road. It was a sweat-drenched set that I will remember for a long time, and now I have the recordings to crystallize it. Listen to Demarco’s live version of “Baby’s Wearing Blue Jeans” below, and discover one of the best live acts going. Purchase Live at Russian Recording while you still can. All of you cheapskates can stream the recordings in their entirety over at Ad Hoc.