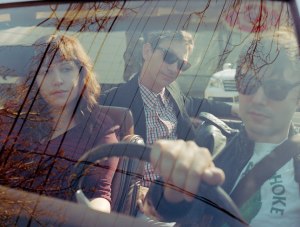 Sonny Smith has bounced back from the post-divorce listlessness of Longtime Companion. He has returned from the wandering, dissociative identity disorder of 100 Records: Vol. 3. On Antenna to the Afterworld, due to drop June 11 on Polyvinyl, Smith is back to what he does best: lending his perceptive, singular voice to understated rock tunes with his posse The Sunsets. He’s scarred, bleary-eyed and the opposite sex is only beginning to come back into focus.

The future is uncertain on the propulsive, guitar-driven “Palmreader.” In the video found below, Smith plays the role of box office attendant / director of a short, black-and-white film that centers around a gory, B-movie death match. The video serves as an odd accompaniment to an otherwise gentle rocker. Maybe it speaks to the precarious nature of Smith’s ambiguous destiny as he re-enters bachelorhood. Or maybe he’s just a guy with a sense of humor and an appreciation for cheap special effects. Watch the video below and pre-order your copy of Antenna to the Afterworld.

Indianapolis readers can catch Sonny & The Sunsets at Radio Radio on Wednesday, June 19. Grab tickets from MOKB Presents. Fellow Californians Little Wings and Bloomington’s Mike Adams at His Honest Weight will be on hand to lend support.