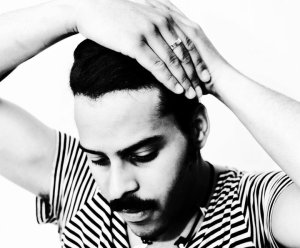 I will reluctantly admit that I was slow on the uptake when it came to Twin Shadow‘s sophomore LP, Confess. For whatever reason, my ears tend to avoid sounds with such overt references to 1980s pop music.  I have always had trouble finding the humanity beneath the often plastic dance beats and synth-driven overlays that dominated popular music during the latter half of that decade. This disdain could stem from my lack of any discernible posterior that prevents my wearing skinny jeans, my inability to dance or an intolerance for uppers of all varieties. That isn’t to say I won’t rock the fuck out to Rick James, provided a few cocktails and a reason to celebrate. But by and large, I find the music to mirror the gaudiness of the time – overstated and manufactured.

Despite all of this, Confess has steadily earned my affection in 2012. Yesterday, the outstanding San Francisco-based video blog Yours Truly debuted their session with Twin Shadow’s George Lewis Jr. “Run My Heart” proves one of my favorite tracks of the album, reminiscent of Police-era Sting or some of Prince’s more restrained work. Yours Truly presents a stripped down, bass-driven version of the song. It’s always a testament to the songwriting when a track translates in any setting. This is certainly the case with “Run My Heart,” which only grows more disarming in the intimate setting of Lewis’ Los Angeles backyard. Check out the video below, that begins with Lewis working on the most rock n’ roll of all vehicles, his Triumph Bonneville. Although he may need to trade it in for a Honda Shadow, just for consistency’s sake.