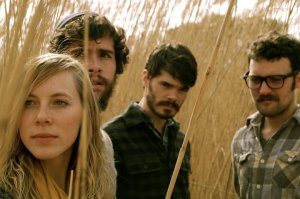 Asheville, NC’s River Whyless dropped their debut LP A Stone, A Leaf, An Unfound Door yesterday. Singers Ryan O’Keefe and Halli Anderson weave pitch-perfect vocals over this string-driven release. The album does not disappoint and showcases a striking amount of maturity for a band that is only just starting out. River Whyless’s sound is rooted in the strings of the Appalachians, but never has the feeling of traditional or bluegrass music. Name your price for a copy of A Stone, A Leaf, An Unfound Door via bandcamp. Catch them on tour this spring with Atlanta’s Little Tybee.