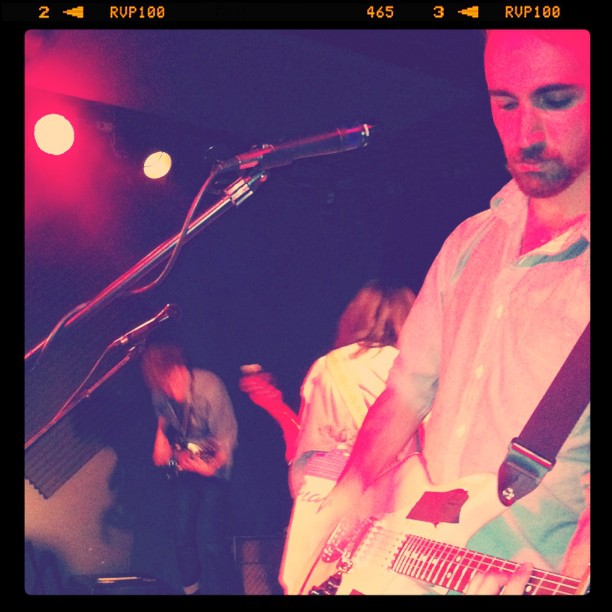 If you have observed this blog since its inception you already know that Thought on Tracks likes Yuck… a lot.  For me, they contribute to the renaissance of the 90’s indie rock sound.  A period of time where friends were collaborating in basements with beers, determined to dominate college radio with distorted guitars.  While J Mascis, Robert Pollard, and Stephen Malkmus continue to make new music, they have also inherited the title “Grandfathers of Indie Rock.”  This designation makes it possible for developing bands like  Yuck to pull from their sound.

Yuck’s debut, self-titled release has been the topic of hundreds of blogs and has maintained major staying power in 2011. The album was released on Fat Possum on February 21 and continues to remain relevant.  I continue to say that 2011 has been one of the best years for new music in recent memory and Yuck has found a way to continue to build a fan base during this time.  Songs such as “The Wall”, “Get Away”, “Holing Out”, “Georgia” and “Operation” all are in the conversation as favorite songs when you talk to Yuck fans.  The fact that this band does not rely on one song to carry their message makes them extremely valuable with only one release under their belt.  The power of having a handful of songs to connect with was displayed Saturday night as the British quartet invaded Radio Radio.

As mentioned previously, this was my third time seeing Yuck. This has not only made me think that I am beginning to form an addiction to the live music experience, but also made me realize that there is something about these guys that resonates.  I attribute it directly to my love of bands like Pavement, Guided By Voices, and Dinosaur Jr. I caught these bands halfway through their formation while Yuck offers an early invitation to jump on their bandwagon.  I saw Yuck play at Pitchfork and hit their after show at Schubas in Chicago in July.  The maturation process shined on Saturday night.  This was the strongest performance of the three and after witnessing the fan reaction, I knew something special was brewing.

On a night that brought the Avett Brothers to town, like-minded individuals still swarmed to Radio Radio to embrace a band that they had a mere six months to connect with.  The crowd was pumped, they knew the words, and Yuck delivered.  “Operation” stood out to me and I contend that it is their best song.  Blasting guitars and a plea to become someone else for somebody else. This is the type of music that I eat up.

Yuck went up and down their album and even offered us newer songs like “Milkshake.”  An invitation to the crowd to meet up for drinks after the show made me realize that this group knows how to maintain their fan base. This band is only going to get better with time and building a fan foundation seems important. A valuable asset held by a young group with mounds of potential. Give us a half a year more and another handful of songs and I might be anointing Yuck as one of my favorite current bands.  I can only hope.

Yuck’s introduction to the Circle City and through the checkered flags made me proud to be a part of a growing music scene in Indianapolis.  I think more people in Indy are beginning to get it and I could not be any happier.  As the culture of Indianapolis grows, so do the wishes of bands like Yuck.  Who knows?  They could be our next Pavement.  We all have high hopes.

Story and Photograph by Brett McGrath