In the Dust #4: Elvis Presley ‘The Sun Recordings’

Once a week In The Dust rolls up its sleeves and digs to the back of the rack to find that record, the one you never knew you always wanted, the one that’s lost, but not forgotten. (Listen via Spotify)

Enough said, right? If you’re still reading at this point, let me say that this is not the bloated, bacon-banana-peanut-butter-fried-donut sandwich King that the name draws to mind. This is Elvis Aaron Presley, an aspiring young singer from Memphis, Tennessee, moonlighting as a truck driver just to keep his head above water.

Presley, at the age of 13, moved with his family to Memphis where he immediately immersed himself in the music scene, absorbing country, honky-tonk, western swing and, most notably, R&B and the blues. Throughout high school, Presley was berated and discouraged by music teachers claiming that he had no aptitude for music, but by the time Presley graduated he was determined to pursue a career in music regardless. With blind confidence, he scrapped up $3.98 and went to Sun Records to record two sides. This is the point in the story where, for other artists, one would say “and the rest was history,” but that’s not the case.

On July 18th, 1953, Presley recorded his first two sides, “My Happiness” and “That’s When Your Heartaches Begin”. The receptionist, Marion Keisker, upon Presley’s arrival, asked him what he sang. He said “all kinds.” “I don’t sing like nobody,” he continued. After recording his sides, Keisker recorded his name on the acetate and added, “Good Ballad Singer. Hold.” Presley received one copy of the recording, which he gave to his mother, who, at the time, did not even own a record player.

Early the next year, on January 4th, 1954, Presley recorded two more sides, “I’ll Never Stand In Your Way,” and “It Wouldn’t Be The Same Without You”. These, much like the first two sides, were flops. It appeared that no one was interested in Elvis Aaron Presley the ballad singer.

After several failed auditions as a vocalist for local bands, Presley told his father, “They told me I couldn’t sing,” echoing the words of his old teachers. It is then Presley got a job big-rigging at the Crown Electric Company. He continued to try out for other local groups but was rejected every time, bandleaders citing that Presley should stick to being a truck driver “because you’re never going to make it as a singer.”

Sam Phillips, Sun Records President, saw what he believed to be a hole in the market, but could not find the right man to fill it. Keisker remembers, “Over and over…Sam saying, ‘If I could find a white man who had the Negro sound and the Negro feel, I could make a billion dollars.” Phillips had acquired a copy of “Without You”, and he could not identify the vocalist. Keisker reminded Phillips of the young truck driver, the one from Memphis, the good ballad singer, and Phillips invited Presley back to Sun Records for a tryout of sorts.

On May 26th, 1954, Presley returned to Sun Records. In his audition, he failed to do the recording justice. Phillips asked Presley to run through a few other songs in his repertoire. Phillips was less than enthused, but Presley expressed a spirited interest in finding a back-up band and Phillips obliged. He contacted two Memphis, western swing musicians, Winfield “Scotty” Moore, guitar, and Bill Black, slap bass. It is at this point in the story where, for other artists, one would say “and the rest was history,” but that is again not the case.

Presley was set for another audition, one with Moore and Black, at Moore’s house. Again, like Phillips, Moore and Black were less than enthused, but Elvis expressed a spirited interest in a recording session with the two, and they obliged. The session was held on July 5th and lasted late into the night. With exception of what was then considered a mediocre country ballad, “I Love You Because,” the session was largely felt to be unsuccessful. That is until Moore and Black were packing to leave. Elvis struck into Arthur “Big Boy” Crudup’s “That’s Alright Mama,” and started “acting the fool”.

Moore remembers:
“All of a sudden, Elvis just started singing this song, jumping around and acting the fool, and then Bill picked up his bass, and he started acting the fool, too, and I started playing with them. Sam, I think, had the door to the control booth open … he stuck his head out and said, ‘What are you doing?’ And we said, ‘We don’t know.’ ‘Well, back up,’ he said, ‘try to find a place to start, and do it again.”

And the rest was history.

Phillips had found the sound he was looking for, and frantically began checking levels and taping. “Damn. Get that on the radio and they’ll run us out of town,” Black remarked. Phillips did just that. 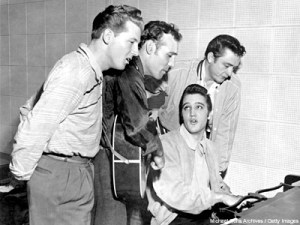 played it repeatedly for the last two hours of the show and later had Elvis himself in for an interview, in which he asked him to identify his high school so listeners could identify his color. Sun Records received over 6,000 advanced requests for the record, with a pop, 4/4, rock and roll version of slow waltz, “Blue Moon of Kentucky” to be pressed as the b-side.

So began the career of Elvis Aaron Presley, some would say with an act of minstrelsy, others would say with pure dumb luck and raw, unrefined genius.

Presley recorded more than twenty songs between 1953 and late 1956 for Sun Records. Of them, 18 “Elvis Presley” sides survive, two are lost, and the rest are billed to The Million Dollar Quartet, of recent Broadway fame. Of the songs credited solely to Presley (with Moore and Black), several the author believes to be among the finest of his career. It is no surprise, when listening to these recordings, that so many have had such issue with Presley’s singing. It is unique, ahead of his time in many senses, and strangely contemporary in others.

“That’s All Right,” Presley’s first hit, a slippery, top-down, walking-bass country blues bears moments of clear attraction to a young Roy Orbison (later to record with Sun Records), Presley’s silky vibrato wafting above of the slap-clang pound of the bass and thin, lick-heavy guitar, which, when taking the two together, appear to inspire the unrestrained grunge-wop, western rock and roll of a “Maybelline” era Chuck Berry to-come. When taken as a whole, the effect is a sound reminiscent of Johnny Cash in his days with the Tennessee Two  (also later to record with Sun Records). “That’s all right, mama,” Presley sings, foreshadowing his own breaking stardom, overarching influences and legions of followers and imitators, “I’m leavin’ town, baby / I’m leavin’ town for sure / Well, I didn’t want you to be a-bothered with me a-hangin’ ‘round your door / Well, that’s all right / Well, that’s all right now, mama,” the acetate a fitting gift for his mother, a gesture of reassurance that he will make it, and a prescient stiff-arm to those who come after, inviting them to play in his wake, because he’ll be watching from the top, shaking his head, knowing they can’t do it like the King.

In 1955, a young Buddy Holly saw Presley perform in Lubbock, Texas. This left a sizable impression on Holly, as he then began to incorporate the country, rockabilly for which much of his music with The Crickets is known. Chances are very good that 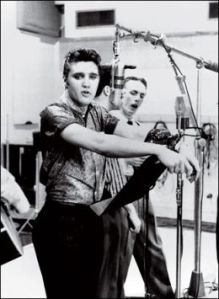 Holly’s attention was most closely drawn by, “I Don’t Care If The Sun Don’t Shine,” a song that sounds as if it could’ve been recorded by Holly himself and simply mislabeled as Presley. “I Don’t Care If The Sun Don’t Shine” exhibits the archetypal, up-and-down slap-bass of the Sun Records sound, coupled with bright, cutting guitar chords, occasional finger-picking and well-bent, Holly-esque solos of classic rock and roll simplicity. Presley rarely visits his lower register, singing of love for his baby in a high, dizzying vibrato akin to Holly’s performance of “Modern Don Juan”, bridging the gap between Presley’s newfound fame as a young, pop sensation and his earlier ballad-driven sensibilities, ostensibly eliminating doubts of his ability to adapt “all kinds” of music for the current market, simply because he “don’t sound like nobody else,” yet.

The song previously felt to be mediocre and difficult to market, “I Love You Because,” shows a particular interesting side of the “good ballad singer”. Elvis adopts a languid, melancholy croon that would later be heard issuing over audiences at the Copa Cabana and all over Vegas, Atlantic City, and other destination hot spots from the microphone of Dean Martin. Presley’s delicate, sliding vocal line is complemented by the striking, metallic and swinging jazz-cum-reverberated rock fingerpicking of Moore. Presley, in a sense, lets it all hang out, expanding to fill the sonic space, and putting his own unusual styling so strongly in the forefront that when he warbles, “No matter what the world may say about me / I know your love will always see me through / I love you for the way you never doubt me / But most of all I love you because you’re you,” it is distinctly as if he is in conversation with himself, echoing the same blind confidence that he first took with him to Sun Records, refuting the opinion of countless music teachers and bandleaders and even Phillips himself, continuing that, “No matter what the style or season / I know you’re heart will always be true.”

Over the course of the Sun Recordings, Presley successfully tackles a multitude of genres from sentimental ballad, to western swing, to country and country blues, to rockabilly, to even bluegrass waltz and blues standards like “Milk Cow Blues”, reworked into the boogie-woogie “Milkcow Blues Boogie”. With each song we hear a different, but equally poised and unyielding Elvis, singing unlike no one else in his day. It is apparent that Elvis is still finding his voice, but he is in no hurry. He is making everything his own, and as he does so cycles through vocal performances that will inspire countless singers for decades. Many have claimed Buddy Holly to be the single most influential figure in rock and roll. Others have said Roy Orbison or Chuck Berry. Perhaps, those with that claim did not go back far enough.