In The Dust #3: John Coltrane ‘A Love Supreme’ 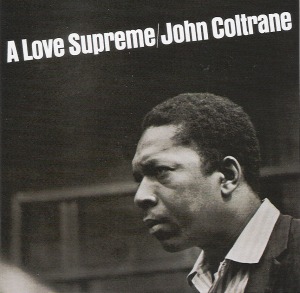 Once a week In The Dust rolls up its sleeves and digs to the back of the rack to find that record, the one you never knew you always wanted, the one that’s lost, but not forgotten. (Listen via Spotify)

This is the Holy Grail.

I wish I could leave it at that, but a record this dense, of this magnitude, of such indescribable brilliance—while with opaque brevity seems the only effective way to approach it, this record deserves more.

John Coltrane recorded A Love Supreme in a single day, on December 9th, 1964, at Van Gelder Studios in Englewood Cliffs, New Jersey. The personnel list is a veritable who’s who of hard bop: Jimmy Garrison on double bass, McCoy Tyner on piano and Elvin Jones on drums. The album is structured as a four-song suite and clocks in at a trim 33:02, but as many physicists contend that an entire universe can exist in a single atom of one’s fingernail, so does a universe in every note of A Love Supreme.

At the albums center is a single concept and a single motif. Coltrane writes in his liner notes to A Love Supreme, “This album is a humble offering to Him. An attempt to say “THANK YOU GOD” through our work, even as we do in our hearts and with our tongues.” It is indeed a spiritual album, a prayer, one over the course of which Coltrane embarks on a quest for understanding and purity. Through this suite, Coltrane wishes to establish a communion with God and express to Him a realization that neither his talent nor his horn are his own, but rather gifts from Him, and for that he is grateful.

Coltrane establishes this communion in a sequence reminiscent of said prayer. Of the structure, Coltrane writes:

The music herein is presented in four parts. The first is entitled “Acknowledgement,” the second, “Resolution,” the third, “Pursuance,” and the fourth and last part is a musical narration of the theme, “A LOVE SUPREME,” which is written in the context; it is entitled, “Psalm.”

Part I, “Acknowledgement” is Coltrane’s “Dear God.” It begins with a gong, a call to attention, over which Coltrane floats a repetitive fanfare that is a loose variation on the piece’s central theme. From beneath Coltrane’s rooster-crow, Elvin Jones washes his way into focus with dusty cymbal crescendos and rolls. It is then, in the deep groove of Garrison’s double bass, we first hear the central motif: “ba-dum ba-dum, ba-dum ba-dum.” Garrison leads this motif as it is repeated four times. Jones then strikes the beat. It is repeated four more times and Tyner joins with a smattering of complementary chords. It is repeated eight more times, as if to set the stage for the main attraction, and Coltrane returns, sliding onto the forefront of the aural canvas with break-neck modulated variations, at which point Garrison retreats and all proceed to follow the master. Coltrane’s horn seems to cry out with the repressed anguish of every past transgression, first in a spitfire wailing, like a pressurized liquid breaking its seal, and later in controlled four-note bleats, as if he has nothing more to confess, no more tears to cry, and is now apologizing to Him, pleading that he’s been a believer all along. These four-note bleats slowly recede into the most visceral, penetrative moment of the album: a vocal refrain from Coltrane himself of the albums theme: “A Love Supreme,” a final acknowledgement, a moment of peace in knowing that if one can muster confession, He can muster forgiveness.

Part II, “Resolution,” begins, as did Part I, with Garrison leading, this time alone. He rapidly plucks sharp pairs of repeating notes with palpable determination, generating a forward momentum, on which Jones, Tyner and Coltrane can simultaneously jump. They attack with a purposeful and 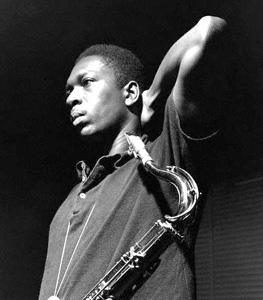 deliberate ferocity, one that they effortlessly maintain throughout “Resolution,” one that echoes the very title of the movement itself. Coltrane has concluded his address to God, not-so-literally acknowledging own misdeeds and misgivings and His grace and power, and graduated to discussing with God what he believes he can do to atone and gain His favor. Coltrane’s resolve comes in the form of two fervent, insistent solos, both foreshadowing and echoing each other respectively, and separated by, as if from His own lips, a strict, capable, and somehow patiently impassioned retort from the keys of McCoy Tyner. Coltrane pleads to be a better man, promising that by giving ownership of his talent and craft away to a higher power, he will become a conduit for Him, and thus more powerful himself. The movement bookends how “Acknowledgement,” began not with a bang, but with a whimper: Jones crashes hard, then rolls softly and washes into the ether as the band slowly and carefully descends and side 1 hisses to a close.

“Pursuance,” Part III of the suite, the beginning of the second side and the centerpiece of the album, is Coltrane’s response to what he proposed in “Resolution.” It begins, appropriately enough, with a drum solo from Elvin Jones. Jones was once asked how he and Coltrane are capable of making the music they do. Jones famously responded, “To play the way we play, you have to be willing to die for the motherfucker.” Jones’s solo is a perfect example of this, and a fitting retort to “Resolution.” He begins in empty space, tapping inquisitively on his ride cymbal and tentatively on his toms until runs begin to materialize, along with his confidence and direction, which take their shape before you as if by magic. He slowly emerges from an ambient whisper to practically scream, “We told you about it, now watch us do it!” From the first notes out of Coltrane’s horn, a walking bounce of sorts, it’s clear that “Pursuance,” is pure action! Coltrane sets this tone and immediately passes it to Tyner for further exposition. Tyner sprints his way up and down the keyboard, tickling wind-chime runs that he breaks with terse, round chords as Jones rides hard and Garrison walks the bass behind him. Coltrane breaks back in over Tyner with fire and brimstone. Inaction is sin! No more propositions! Each member of Coltrane’s band asserts that suggestions and hints have occupied their place in this suite and now it is time for execution. And heads do roll.

Part IV, “Psalm,” is the spire on the church, as the cherry is to the sundae. In his description of the suite, Coltrane refers to “Psalm” as a ‘musical narration’ of his devotional poem of same name as the album, included in the liner notes. The poem reads as follows:

I will do all I can to be worthy of Thee O Lord.
It all has to do with it.
Thank you God.
Peace.
There is none other.
God is. It is so beautiful.
Thank you God. God is all.
Help us to resolve our fears and weaknesses.
Thank you God.
In You all things are possible.
We know. God made us so.
Keep your eye on God.
God is. He always was. He always will be.
No matter what…it is God.
He is gracious and merciful.
It is most important that I know Thee.
Words, sounds, speech, men, memory, thoughts,
fears and emotions—time—all related …
all made from one … all made in one.
Blessed be His name.
Thought waves—heat waves—all vibrations—
all paths lead to God. Thank you God.
His way…it is so lovely…it is gracious.
It is merciful—Thank you God.
One thought can produce millions of vibrations
and they all go back to God … everything does.
Thank you God.
Have no fear…believe…Thank you God.
The universe has many wonders. God is all. His way…it is so wonderful.
Thoughts—deeds—vibrations, etc.
They all go back to God and He cleanses all.
He is gracious and merciful…Thank you God.

Glory to God…God is so alive.
God is.
God loves.
May I be acceptable in Thy sight.
We are all one in His grace.
The fact that we do exist is acknowledgement of
Thee O Lord.
Thank you God.
God will wash away all our tears…
He always has…
He always will.
Seek Him everyday. In all ways seek God everyday.
Let us sing all songs to God
To whom all praise is due…praise God.
No road is an easy one, but they all go back to God.
With all we share God.
It is all with God.
It is all with Thee.
Obey the Lord.
Blessed is He.
We are from one thing…the will of God…
Thank you God.
I have seen God—I have seen ungodly—none can
be greater—none can compare to God.
Thank you God.
He will remake us … He always has and He
always will.
It is true—blessed be His name—Thank you God.
God breathes through us so completely…so gently
we hardly feel it…yet, it is our everything.
Thank you God.
ELATION—ELEGANCE—EXALTATION
All from God.
Thank you God.         Amen.

Coltrane, in his ‘musical narration’, effectively “plays” these words to close the suite. Over the thick, heavy pulse of Tyner’s chords, the asymmetrical, tympanic rolling of Jones’s drums, the sizzling splash of his cymbals, and the flurried thumping of Garrison’s bass beneath Jones, Coltrane pours his soul from his horn, echoing the messages of each previous movement, and speaks of new life emerging from them. “I will do all I can to be worthy of Thee O Lord. / It all has to do with it. / Thank you God,” he sings, repeating his “Acknowledgement.” “One thought can produce millions of vibrations / and they all go back to God … everything does. / Thank you God. / Have no fear … believe … thank you God,” he sings, colored with the promises of “Resolution.” “No road is an easy one, but they all / go back to God. / With all we share God. / It is all with God. / It is all with Thee. / Obey the Lord. / Blessed is He. / We are from one thing … the will of God … thank you God. / I have seen God – I have seen ungodly – / none can be greater – none can compare to God. / Thank you God,” he sings as we retrace the steps along the road of “Pursuance.” He concludes both his ‘musical narration’ and his poem, “ELATION-ELEGANCE-EXALTATION / All from God. / Thank you God. Amen,” and he summons from his horn a cry of mad and tearful ecstasy, like Baldwin’s John in Go Tell It On The Mountain, writhing on the floor of a Calvinist Church, screaming, disoriented and exhausted, aching from the intense mental trial of being saved. Coltrane’s last breath passes in a flurry of notes and dies softly, as if he is drained of it, and with it the last of him is gone. He will continue to blow his horn, but he will not own it, and it will not be his breath that fills it. It will be His.