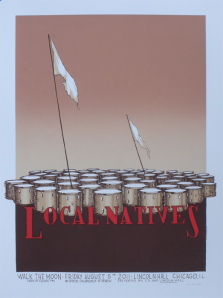 The After Show: (n) the opportunity to prolong your festival weekend with a low capacity, indoor venue where festival acts (and the occasional local product) join forces to rock your sun burnt faces off.

Lincoln Hall is a spectacular venue.  The capacity maxes out under 500, with plenty of room to hand jive and such. (As a fellow from Indy, I am not quite Rhodes Scholar status when it comes to Chicago venues, I could be wrong about the capacity).  Alpha King on tap – YUSS SIR. The ability to build your chill zone and vibe out to music – ABSOLUTELY!

Cincinnati poppy pop pop alt rockers Walk the Moon served as the opening act.  I have gushed over these guys over the past few months. Their release I Want, I Want has been a member of the Heavy Rotation Club since July.  Disappointment quickly set in after the band closed “Anna Sun.”  Failing to play the title-track “I Want, I Want” coupled with the neglect of “Blue Dress” set me off to a bad start.

LOCAL NATIVES!!!!!!!!! This group reaffirms my belief in music.  The crowd was heavy and the delivery was earth shattering. Opener “Camera Talk” set the Gorilla Manor Army into a frenzy.

“I knew this would be the part

My plane’s arrival catches me off guard

We’ll all be leaving with a broken heart

Wallets empty and we’re back at start”

The lyrics from these LA All-Stars could not have proven any more correct.  My wallet was on its last legs after this show (not to mention weekend) but being caught off guard never felt so $$$$!

“Airplanes” was a uniform bonding experience with strangers.  “Sun Hands” was passion derived from common interests. Finally, “Shape Shifter” changed perspective while placing importance on positioning and lust for a band.

Local Natives – you pull my strings.  “Who Knows, Who Cares…”

Written and experienced by Brett McGrath