Once a week In The Dust rolls up its sleeves and digs to the back of the rack to find that record, the one you never knew you always wanted, the one that’s lost but not forgotten. 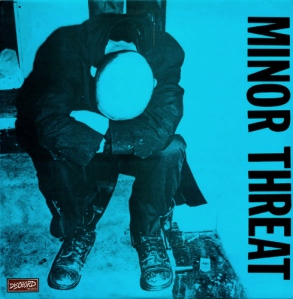 Check out our Spotify playlist, In the Dust 19: Minor Threat for a sampling of the tracks discussed below.

Hardcore. It’s fast, dirty, loud, and aptly hard to its core. For many, it’s an acquired taste, and in certain cases admittedly difficult to discern one band from the next without a firm knowledge of its intricacies or locales or incestuous past, but Minor Threat is one band, however short-lived, that transcended the social understanding, or even social stigma, of hardcore, leaving a shoeprint much larger than its foot, and that of many of its contemporaries.

The much-maligned hardcore and its aggressively independent, no frills, no airs, DIY aesthetic is generally at odds with the reportage style of this piece from week to week, so let us meet halfway and begin by saying:

I think Minor Threat is fucking great. So fuck you.

Founded by Ian MacKaye and Jeff Nelson in 1980, Minor Threat is a cornerstone of the world-renowned D.C. hardcore scene. Along with contemporaries like Bad Brains and California hardcore band Black Flag, fronted by D.C. native and D.C. scene veteran Henry Rollins, Minor Threat helped pave the way for many American punk and hardcore of the 80’s and 90s, as well as grungers like Nirvana and Pearl Jam, the significantly funkier side of the Red Hot Chili Peppers, unabashed Minor Threat disciples, and more. MacKaye and Nelson’s business ethics also inspired generations of musicians across genres by releasing all their material, and the material of countless other hardcore bands, on their own label, the now-famous Dischord Records.

Like all subcultures, hardcore began as a reactionary product of life on the fringe, disenfranchised and labeled as hopeless, but the spirit of hardcore itself is the contrary. It is a self-reliant, ambitious and propulsive group, appreciative of its position in the cultural context. In their short body of work, Minor Threat, perhaps of all hardcore bands, best embodies this. Over the 26 tracks and 47 minutes of their Complete Discography, released, per usual, on their own label, Dischord, messages of hope, valorous struggle, independence, indignation, pride and self-acceptance are hurled at you with frightening and exhilarating velocity, one one-minute song at a time. Functioning successfully as a single album with a cohesive narrative, the Complete Discography, tracked in roughly chronological order, immediately establishes these themes and continues to build on them, as the band continues to record and evolve, until they are rendered as complex and complete manifestos of a microcosm speaking for a nation as a whole.

The album’s first track, “Filler”, is anything but. It begins with a triumphant crunch of heavily distorted guitar, then the bass, deep, commanding, ominous, and the drums, fully automatic, firing with pointed precision. MacKaye, the groups vocalist, who later went on to form the comparably iconic band, Fugazi, finally enters with a scathing, self-insisting critique of conformity, Religion and love, what he asserts is equally as opiated and destructive.

This is not a reaction to change itself but rather the change of one’s ideals to what is seen as a false ideology, the termination of the effort to conduct one’s self as a reactionary agent and instead give in to join the other side, the easy life, prepackaged for the masses by which one was previously marginalized.

This strict aversion to outside philosophy is reinforced by what, in many ways, is Minor Threat’s most influential cut, the album’s fourth track, “Straight Edge”. Despite its svelte 0:45, “Straight Edge” is responsible for starting the “straight edge” movement, and solidifying Minor Threat, whose lifestyle served as the model, as its progenitors. The core tenants of the movement are a simple, logical reaction to the excesses of punk music: no alcohol, tobacco, or recreational drugs, and in many cases no promiscuous sex. Minor Threat adhered closely to these tenants, detailing those particular to drugs use in “Straight Edge”:

As with all collections of outcasts labeled as a subculture, there are basic unifying factors. For hardcore, being straight edge quickly became one, expanding from its position on drugs and alcohol to address sexual practices, dietary habits, animal rights, politics and medicine.

Beyond being a polarizing, genre-molding, cultural icon, Minor Threat is, in essence, a damn good band composed of technically proficient, but most importantly inventive and stylistically sound musicians. Their cover of The Monkees’ “Steppin’ Stone” is a testament to that.

The choice of “Steppin’ Stone” might initially seem an odd one, but the song’s message fits perfectly into the ideals of the hardcore community and the message of the band itself: moderation, honesty, respect (if earned) and independence.

Their reimagining of The Monkees’ original is mark of an intelligent band making an unexpected but deceptively appropriate choice, and it results in one of the best tracks of their career, sonically, iconically and musically. Watch a live video for “Steppin’ Stone” below.

A brilliant centerpiece to their Complete Discography, “Steppin’ Stone” is the perfect introduction to the perfect band for those who “hate hardcore”, like I did, until I fell in love with Minor Threat, and by association the pieces of hardcore, and my burgeoning understanding of and eventual love for it, fell into place.

I used to scoff at hardcore. Now I scoff back, but I still remember what it’s like on the other side. I look back on it not as a member of the hardcore community, but in the same sad way many look upon those to whom they fail to be understood: guarded, but with empathy, self-confidence and an extended arm.

To be sure, hardcore not for everyone, but it’s also not what you think. Open your ears. Eat your cultural vegetables. Like the straight edge, you might even become a vegetarian.

And if you still just fucking hate it:

You tell me that I make no difference / At least I’m fuckin’ trying / What the fuck have you done?

Damn it’s been a good year for NYC’s up-and-coming Paper Garden Records. The label is responsible for Thought on Tracks favs Little Tybee and Big Tree. Now enter Washington, D.C.-based electric-folk band Pree. The four-piece band is the brainchild of guitarist May Tabol, who formed the group after departing from Le Loup.

I’ll leave it to the band for an explanation of how they came together:

“Folly was written and recorded over the course of several heat waves and snow storms by May and her cohorts in a rotating cast of bedrooms, basements, and attics across the District, bearing witness to two foreclosures, a bit of squatting, a larger bit of eviction, and a subsequent life shuffle that would rival that of a wind-addled gypsy moth. The patchwork, guerilla style of recording which grew out of necessity ultimately served to instill a sense of tension throughout the record, leaving one hanging on despite the imminence of something so delicate falling apart.”

Their debut release Folly is anything but. Tabol’s cheerful, bouncy vocals weave in and out of her bandmates, melding together like the most beautifully constructed bar room conversation. The last line of their description of the album’s recording proves apt. Folly feels as if it’s built like a house of cards, were any individual element removed, it would all come crumbling toward the floor.

Pree is in the midst of a rigorous tour schedule until early December. Listen to tracks “Lemon Tree” and “Fresh Paint” below. Purchase Folly on CD or vinyl: HERE. It is also available via Spotify. Their debut came together like a perfect storm. It will prove interesting to see whether or not this quartet can create equally entertaining sounds once they’ve settled in.