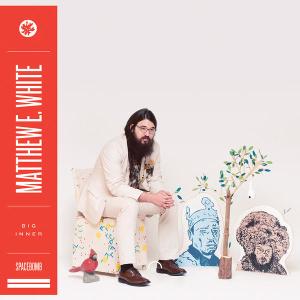 What would a Periodic Table of Elements for soul and R&B look like? What essential components are necessary to create the genre? These seem to be the questions with which Richmond, Virginia’s Matthew E. White wrestled while laying down the vision for his debut LP Big Inner. In his review, Hank from We Listen For You talks about White’s use of religion as a touchstone for the genre on the album’s 11-minute closer “Brazos.” I couldn’t agree more, but why stop there? The subjects of the LP’s seven tracks read like a thematic history of R&B: love, heartbreak, yearning, tragedy, patience, celebration and salvation are distilled down to their respective essences, standing like pillars upon which the entire genre’s existence is built. It’s as if White is saying, “This is soul in its most prosaic form. The stories and characters are all superfluous.”

At the turn of the century, R&B was undergoing a minimalistic renaissance spurred by artists like The White Stripes and The Black Keys. White employs a different kind of minimalism, both implied and literal, to achieve a similar end on Big Inner. His lyrics are reduced to mantras, almost entirely devoid of narrative of any kind. Musically, the tracks on Big Inner contain complex horn charts, strings and vocal arrangements, but the individual parts are all so understated that the work, taken as a whole, feels sparser than it really is.

Much has been made of the connection between White and Randy Newman. This is not without merit, as White has declared Newman a major influence. However, the genius of Newman’s early work lies in his ability to create grandiose concepts out of political irony. White steers clear of such topical discourse.  Instead, the irony he conveys rests on his ability to make a 30-piece band sound so simplistic and focused. White has taken music with the scope and size of Newman’s film work, and boiled it down to resemble Sail Away or Good Old Boys.

Regardless of its inspiration, White has achieved a rare feat with Big Inner, releasing a Big Band soul record while avoiding the pitfalls of the genre’s clichés. He pulled this off by deconstructing minimalism not R&B. In doing so, White has brought the genre’s tenets to the forefront and whittled them down to their cores for all to see. Whether the model he has constructed at his new label Spacebomb Records is financially sustainable is a different post for a different day. For now, let us all give a resounding thanks that whatever happens, we’ll always have Big Inner. Listen to “One of these Days” and “Big Love” below.