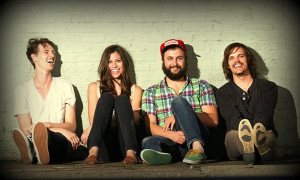 Without a doubt, one of my favorite 2012 discoveries has been Louisville’s Houndmouth. The band recently dropped their debut, self-titled EP via Rough Trade Records. This week Houndmouth shared the official video for their steamroller of a single “Penitentiary“, directed by We Listen For You‘s Zach Hart. Watch below as Houndmouth plays narrator in the story of a young couple wrestling with the decision to turn criminal in the face of financial ruin.

Houndmouth to Support The Lumineers at Radio Radio

I just want to take a moment to thank MOKB Presents for offering Indianapolis listeners some unbelievable shows, top to bottom, thus far in 2012.  The strength of the opening acts on some of these bills has been mildly ridiculous.  WATERS opened for Delta Spirit and will return to open for Nada Surf next month. GIVERS opened for Dr. Dog. Porcelain Raft opened for Youth Lagoon. Next week, Shearwater will open for St. Vincent.

Today, MOKB Presents announced that Houndmouth will serve as support for The Lumineers on May 24.  This band has been garnering a rather large following over the last few months in Louisville.  I have been smitten since WLFY shared the phenomenal video for “Houston Train” featured below.  Their southern-fried, “recession rock” will be the perfect appetizer before The Lumineers.

This is the show for any of you boneheads who to this point have hesitated to venture down to Fountain Square. This is not fuzz-laden garage rock. This is accessible, whiskey-drenched, shake-what-your-mama gave you awesomeness. And I can’t wait! Grab tickets for $10.  Listen to “Petitentiary” and watch the video for “Houston Train” below.

Band to Watch: The Lumineers