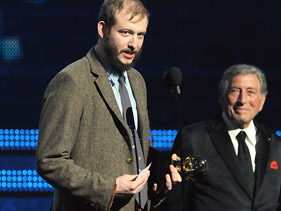 For those of you that may have missed it, Justin Vernon, lead singer of Bon Iver, won two GRAMMY awards last night. One for Best Alternative Album and the other for Best New Artist. The latter win came despite the considerable success of Vernon’s debut 2007 release For Emma, Forever Ago.

“Hi. It’s really hard to accept this award, um. But, uh, well there’s so much talent out here – like on this stage, and there’s a lot of talent that’s not here tonight. It’s also hard to accept because, you know when I started to make songs, I did it for the inherent reward of making songs…So I’m a little bit uncomfortable up here, but with that discomfort I do have a sense of gratitude. I want to say thank you to all the nominees and to all the non-nominees that have never been here and never will be here…”

It seemed Vernon was attempting to use the stage at LA’s Staples Center as a platform to discuss the growing dichotomy between The Recording Academy and the rise of independent artists and labels, bolstered by the Internet’s effect on popular music. While I agree wholeheartedly with Vernon’s words, the end result appeared less of a rebel’s stance than the beating of a half-dead horse.

An acceptance like Vernon’s would have came across as shocking and noteworthy had it occurred in the 1990s, when major labels were still churning out platinum albums with regularity. Instead, Vernon’s words come after a decade of turmoil within the industry that has seen album sales dwindle and independent artists thrive in a fashion never previously thought possible. As a result, I found myself cringing during the speech rather than pumping my independent fist firmly in the air.

Essentially, the revolution in music has already taken place. The independents have won the war, even if the bourgeoisie may win a few more skirmishes. Yes, the major labels continue to maintain the lion’s share of radio time, but I tend to think that balance of power will shift naturally as radio moves from the airwaves to the Internet in the coming years.

So I ask, what was gained by Vernon’s decision to take a stance? He didn’t say anything that should come as a surprise to The Academy or its viewers. In my opinion, the bolder decision would have been to quietly accept the awards, knowing that they no longer carry the clout of decades past. Instead, the acceptance was exactly what the lamestream audience expected of indie’s leading man, allowing pop fans to shrug, “Another hipster disses the GRAMMYs…so what?”

Watch the video below and let us know your reaction. Do you think Vernon’s speech was shocking and worthwhile? Or is he simply saying what we all already know: major labels are a decaying dinosaur, grasping at their last strands of control? 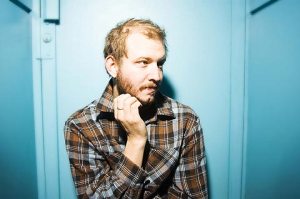 Even after jazz at the Chatterbox (the perfect post-show bar by the way), a night of sleep, and a morning of reflection, my mind is still blown by Bon Iver’s performance last night. With that being said, please be patient while I attempt to gather my thoughts and articulately portray my magical evening.

After an incredible performance by The Rosebuds, Bon Iver took the stage and opened with a stunning rendition of “Perth.” This song was only the beginning of the emotional story Justin Vernon would tell throughout the duration of the night. For every song, you see, was part of this bigger picture…this beautiful journey we all took part in on a Monday night at the Murat. As I’m looking at the set list now I’m wishing I could write a paragraph about each song and how it so intricately fit into Vernon’s mind map of music and words. “Calgary” nearly brought me to tears, “Blood Bank” was epic, and don’t even get me started on the acoustic “Skinny Love” or the Bjork cover, “Who is it?”

This concert was more than a 10 piece band on a stage, it was an experience. Although all were spectacular, my favorite part of the night was not the perfect and meticulous lighting, the thought provoking lyrics, or the life changing harmonies. My favorite part of the evening was the relationship between Bon Iver and Indianapolis.

Throughout his performance he complimented the crowd on our attentive yet interactive behavior. Now of course this is fairly typical for any musician trying to build a connection with the audience; however, there was something very different about this night, this concert, this crowd.  Indianapolis was alive and there was no denying it. As we all anxiously joined in to clap to the beat there was a feeling of solidarity I had never felt before—Bon Iver had never felt before. It became very apparent that the band not only recognized this solidarity but was humbled by it. Vernon even stated, “You’re on your feet. That’s insane. You’re working hard.”

Once the encore was complete the band just stood there for a few minutes, genuinely impressed with the enthusiasm and spirit of Indianapolis. As we cheered and watched Bon Iver take it all in, I noticed they were staring back at us in awe.  It was a mutual exchange of love and respect.  They knew we fell in love with the show…their music…their chemistry.  We knew they fell in love with us as an audience…a being…a city. What a monumental love story.

For one of the first times, Indianapolis had made a true and honest mark on a band’s national tour and that feeling was more than palpable.

As someone who has been fighting for musicians like Bon Iver to visit Indianapolis for years, last night was more than a victory, it was a moment of pure pride. Groups like My Old Kentucky Blog (MOKB) and IndyConcerts have worked their tails off to make Indianapolis a known stop on any band’s tour and well, I tip my hat to you guys.  You not only got them here but you proved it was well worth their while.

This realization comes at a very interesting time for me…as I will be moving to Portland, OR in just a few short weeks. While I’m going to miss nearly everything about the city I’ve called home for 25 years, I feel last night gave me the reassurance to know its okay to leave.  Of course I will never believe my work in music is complete, but now Indianapolis has shown me there at least 2,300 people with the same goal in mind.

I couldn’t be more thrilled and excited for you, Indianapolis music fans. This is your time! With bands like The Head and the Heart, Yuck, ands Cults coming through Indianapolis, I find myself saying something I never thought I would—“I’m going to miss so many good shows in Indianapolis after I move to Portland.”  I know Portland will have an amazing music scene but this is just different. We worked for this.  We earned this and we deserve this.

To Dodge, to my loving concert crew, to my work dropbox, to the Thought on Tracks team, and finally, to Indianapolis, continue to fight the good fight.

Written and experienced by Laura Ferguson

This story was also featured on IndyConcerts.com

This video was recorded three years ago by LaundroMatinee. It was recorded at the My Old Kentucky Blog/WEEM Studios just outside of Indianapolis. Justin Vernon and his band have come a long way since this recording, as illustrated by last night’s performance. Keep your eyes pealed for my review of his Murat show. It was truly a special evening. For now, be sure to check out the setlist.