Indianapolis record label Joyful Noise Recordings has announced its 2013 line-up for its flexi disc series. Each release is exclusive to the series and is limited to just 1,000 copies on flexi disc.  These never-before-heard songs will not be released digitally or in any other format. Two types of subscriptions are available. The standard subscription is priced at $5 per month and includes automatic monthly mailings of each flexi disc with artwork. The deluxe subscription costs $5 per month, plus a one-time $30 fee that includes a hand-numbered, screen-printed wooden box featuring the artwork of Mackie Osborne. Each case is custom designed to house the 2013 flexi disc series. Subscribe HERE and check out the full roster of featured artists below. UPDATE: Less than 50 subscriptions left!!! 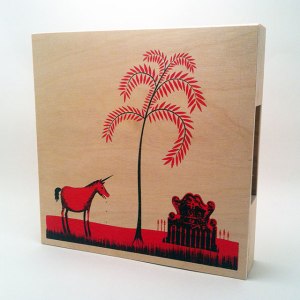