Editor’s Note: This story was originally published on defunct, Central Indiana arts website Sky Blue Window on November 19, 2014. Some content, style and formatting changes may differ from the original version.

A recent study in the Journal of Early Childhood Literacy created a stir in the museum community. The reaction was spurred by coverage in the press, where attention-grabbing editorial tactics and divisive quotes from prominent artists misrepresented the author’s conclusion as a call to allow children to run free in museums. This reaction comes despite the fact that the museum served solely as the setting of the research, rather than the planned target of its results.

Regardless of the intended audience or reaction, Abigail Hackett’s study Zigging and zooming all over the place: Young Children’s meaning making and movement in the museum has people talking. This is due in part to a shift in museum marketing in recent years, which finds the industry redefining its target audience. “There’s been a huge push for family audiences across the board,” says Elee Wood, Director of IUPUI’s Museum Studies program, “both in terms of catering to the needs of younger children … and trying to think about how to be more responsive to audiences in general.”

The Indianapolis Museum of Art (IMA) is one such local museum that has embraced the trend of family-oriented offerings. Through Wee Wednesdays, a weekly program targeting the 2- to 4-year-olds group, the IMA combines structured activities with family exploration. The IMA also offers Art Packs, which provides children with artistic quests of varying complexity. Starting in January, the museum will offer a family day on the first Saturday of every month, which will be thematic, both in terms of the seasons and exhibitions.

“The more successful thing is when you create programs for adults that also work for kids,” says Scott Stulen, IMA’s Curator of Audience Experiences and Performances. “What you want is that the parents feel equally engaged as the kids do … but you think about different ways to engage them.”

Kyle Herrington, Director of Exhibitions at the Indianapolis Art Center agrees with Stulen’s philosophy. His approach to programming for younger audiences is less about lowering the bar and more about leveling the playing field. “Everyone who walks through our doors is an artist or an arts patron,” says Herrington. “It doesn’t matter whether you’re 3 years old or 83 years old. So, when I’m giving tours, I’m talking to them like they’re interested in the work, and I find they respond really well to that. I think that if you assume they’re not going to understand art that’s really detrimental.”

Stulen also warns against the assumption that kids are unable to comprehend highbrow artwork. He talks about an experience at a previous position at another museum, where he asked 6-year-olds to lead tours of one of the more complicated, contemporary art conceptual shows. “Their tours were incredibly accurate, because they don’t have any baggage,” he says. “They’re actually right, because they’re saying what they see in front of them. At times, we assume a lot of things as adults that are not necessarily true about kids.”

In the same way Herrington and Stulen are altering the discourse between art institutions and their patrons, Hackett is attempting to reinterpret the way in which child development experts analyze early forms of communication. “Focusing equally on all modes employed by young children in their communicative practices presents a challenge to the role of spoken and written language, both as the primary means of communication and as the end goal towards which other forms of communication are building,” Hackett writes. “Instead, the emphasis is on understanding the perspectives and viewpoints of the young children who are constructing these complex and creative multimodal practices.”

“Just as play activities have been recognized as a complex and meaningful combination of multiple modes, drawing on creativity, identity, and peer and family relationships to construct communicative signs,” she continues, “walking and running must not be dismissed as the ‘noise’ that happens in between focused engagement and learning in a museum.”

The Children’s Museum places an emphasis on family learning, with the belief that a child’s experience will be enriched by the active involvement of a parent or guardian. “Once in the exhibit, we love to see the adult or parent asking those open-ended questions,” says Southerland. “When you see something, how does it make you feel? What do you wonder? What do you want to know? Asking all those questions that elicit language, because we know this is so important for young children.” 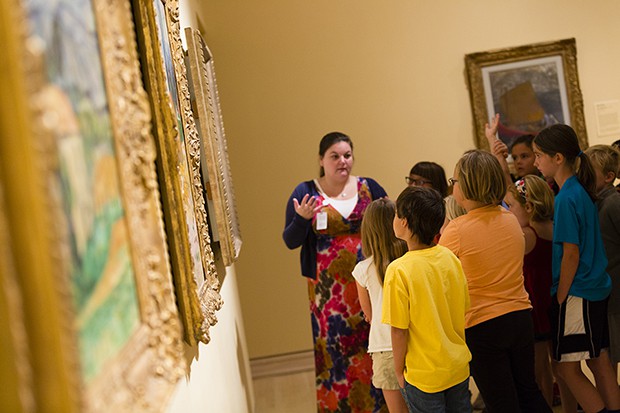 Herrington echoes that sentiment, saying: “When people are taking young kids to cultural institutions, galleries, and places like that, it’s really the role and the job of the guardian to be a cultural steward for that kid to guide them through why these places are important and how we behave in a gallery.”

For Stulen, it’s a risk he’s willing to accept. “As far as it goes, with worrying about the artwork, adults are 10 times worse than kids,” he says. “They’re so much worse about touching stuff and being a problem than kids are.”

One of the most difficult challenges when organizing an established annual event is the pressure to keep things fresh while staying true to the vision that made the event a success in the first place. This dilemma proves constant for arts organizations, which rely heavily on events for funding and attracting audiences to wider programming efforts.

“When I joined the board, there was discussion that they were going to table Installation Nation,” Indianapolis Art Center President Patrick Flaherty says of joining the team at Primary Colours a couple of years ago. “I was really surprised to hear that, because it was one of the things I was excited about when I came on board.”

In his first year as Chair of Primary Colours’ board, Flaherty transitioned Installation Nation from the industrial confines of the shipping containers that defined the parameters of the event’s early iterations to the spacious grounds of IAC’s ArtsPark.

“What’s neat here in the park, is that you can see multiple installations at once,” Flaherty says. “As you’re interacting, experiencing or checking out one, you’re subconsciously, or consciously, looking at the next one. They overlap and talk to one another.”

On Friday, Primary Colours will switch the format for Installation Nation again. For the first time, students from two IPS schools will contribute an installation to the event alongside the 12 contributing artists.

“I don’t feel like artists with a capital ‘A’ should be something intimidating to people,” says Installation Nation board member Laura Harris. She led the charge to incorporate students into the mix this year.

“I just like the idea of all of them coming together to be part of something and then seeing where they fit — or even that they do fit — in a larger artistic community, and that it’s out there for them,” Harris says. “Just seeing those connections … the community to the schools and the schools to the community, I think it’s just such a win-win situation to make everybody more aware of what’s out there, and how they can be part of each other’s lives.”

Students at IPS 91 will contribute a peace pole that coincides with the school’s Montessori curriculum, one which promotes peace within the students themselves, the school, the community and the world at large. The structure stands 8 feet tall and is adorned with about 40 ceramic plaques with different words and symbols representing the kids’ interpretation of peace.

After its two-week stay at the Art Center during Installation Nation, the peace pole will return to IPS 91 to reside permanently in the school courtyard.

“I have what I call my ‘Lunch Bunch Kids.’ They’re intermediate kids that don’t like recess,” says IPS 91 art teacher Kim Thaxton. “So, they’ll come to my room during my lunch period. Then they stay in for recess. So, we’ve been doing a lot of things for our courtyard. I’ve been calling it the ‘Courtyard Club’ … because the courtyard is in the center of the school and it had been looking really bad.”

The other student-led installation was created by Sidener Academy. Sidener’s contribution centers around a 4×4-foot plywood board with the word “life” cut out of the center, serving as the installation’s negative space. The second part of it features hundreds of crayons upon which students wrote words that are important to them about life. “A lot of them wrote ‘family’ or ‘mom,'” Harris says. “Not as many ‘dads,’ unfortunately [she says laughing], but some, definitely some.”

The crayons were then glued onto the board. The goal was to place the structure in the sun, causing the crayons to melt and their colors to drip into the word “life.” Unfortunately, the crayons proved stronger than Indiana’s late-spring sun, and blow dryers were needed to start the melting process. The installation should continue evolving during the next two weeks in the hot summer sun.

Flaherty hopes the potential for the installations to evolve throughout its run will serve as an incentive for visitors to return beyond Installation Nation’s opening night. “We’re hoping that a lot of people will come back,” he says. “Maybe come to the opening, check out the party, have a good time, meet some of the artists, but then … come back 10 days later when it’s less crowded and see what happened to them.” 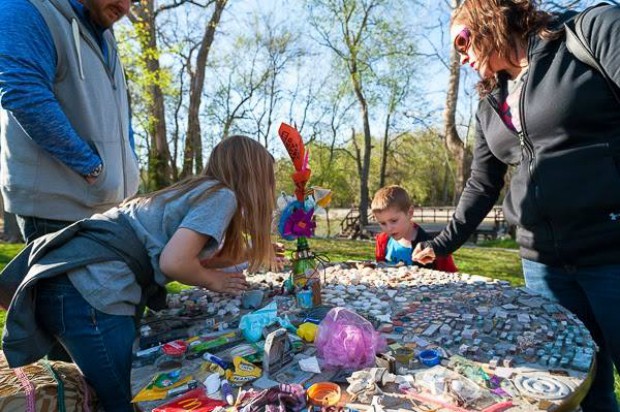 Installation Nation will open in the ArtsPark on Friday, June 26 from 6 p.m. until 10 p.m. The 12 contributing artists, as well as students and teachers from the participating schools, will be on hand to discuss their installations with visitors. The event is free and open to all ages. Deejays from A-Squared Industries will curate the musical backdrop, and food trucks will be parked outside.

“It’s just so cool for the Art Center to be able to collaborate in this way, because it allows us to activate our park in a perfect way,” Flaherty says of IAC’s partnership with Primary Colours. “So you turn our nine and a half acres of beautiful land on the White River into something that echoes what we’re trying to do (which is promote the arts). It’s a really good example of the partnerships that I would love to see more of in this community.”