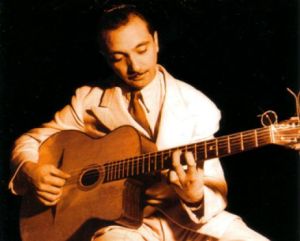 Once a week In The Dust rolls up its sleeves and digs to the back of the rack to find that record, the one you never knew you always wanted, the one that’s lost, but not forgotten.

In the Belgian countryside in 1910, a baby boy was born to the Reinhardts, a family of Manouche gypsies. They named him Jean, but soon would refer to him by his nickname, “Django”, Romani for “I awake”. Little is known about his life, as such a community keeps no record, though we know just enough to account how a near-death accident begat one of the most original and most influential jazz guitar players in history.

The Reinhardts were furniture makers. They scavenged for cane or any suitable material they could find to weave it into tables, chairs, anything of necessity for potential customers. The Reinhardts lived mostly in group encampments close to Paris, but far enough away that the community’s vagrancy was not a bother.

As entertainment was hard to come by, the Reinhardt clan and their extended community included a number of talented amateur musicians and music was a keystone of life. Django exhibited an interest from an early age, learning very young how to play the violin and, later, at age 12, the banjo. Thanks to the tutelage of two older gypsy musicians, Django left furniture making behind and began playing banjo professionally one year later, at the age of 13.

By 18, Django was married, living with his wife in their own caravan, and deep into his career as a professional musician. They were desperately poor, as Django was still young and inexperienced, so his wife, Florine, sold flowers she twisted out of celluloid and paper for extra money. After returning home late from a gig, Django knocked over a candle. He went to bed, not knowing his wife’s flowers had caught flame.

Django’s neighbors pulled he and his wife to safety, but not before Django had sustained first and second-degree burns over a substantial portion of his body. His right leg was initially completely paralyzed, and the ring and pinky fingers of his left hand, the one he used to form chords, were severely burned. He was taken to a hospital, where doctors informed him they would have to take his leg, and he would never play guitar again.

Reinhardt refused the surgery. Within a year he was walking with the aid of a cane and, after receiving it as a gift from his brother, Reinhardt put aside his banjo and set about reinventing jazz guitar.

His ring and pinky fingers never overcame their partial paralysis. Reinhardt learned to play solos with just his index and middle fingers, the others he used exclusively for chording. This new technique resulted in a curious and entirely new style now referred to as “hot” jazz guitar, akin to style of New Orleans-based Louis Armstrong and his band, featuring blinding tempos and frenzied improvisations of astonishing speed and dexterity, peppered by crisp, cutting chord work.

Soon after Reinhardt’s rehabilitation and discovery of “hot” jazz, he met a young

violinist named Stephane Grappelli. The two were both enamored of Louis Armstrong and shared similar musical sensibilities. Because of the radical nature of Reinhardt’s new style, paid work was nonexistent, so from the years of 1929 to 1933, he and Grappelli played only for, and with, each other and several other local musicians. These years, along with Reinhardt’s previous rehabilitation, are largely considered to be one the most important “quiet” periods in jazz, and the musical companionship of Reinhardt and Grappelli, for many, produced the finest music of either of their careers.

In 1934, Reinhardt’s brother, Joseph, invited Django and Grappelli to join his Quintette du Hot Club du France. Effectively no longer a quintet, the group now featured three guitars, a violinist, and a bassist, all string instruments, which at the time was rare. Occasionally the group would back a singer, but Reinhardt, his groundbreaking guitar playing and masterful interplay with Grappelli would soon become the focal point.

It is at the formation of the Quintette du Hot Club du France The Classic Early Recordings, a five-disc box set, begins, featuring the group’s first ever recordings, twenty-two sides billed as their own and four as the backing band for instrumentalists Frank ‘Big Boy’ Goudie and Alix Combelle. Of the twenty-two QHCF sides, nineteen are jazz standards or popular songs, but “Djangology”, a dizzying, jaunty, knock-kneed three minutes split into first a Reinhardt then a Grappelli solo, one of the groups first original compositions, would soon become a jazz standard itself and solidify Reinhardt, Grappelli and the entire QHCF as artists of the highest caliber.

Volume B skips ahead considerably in the chronology, as it is a collection of the 1938 & 1939 London Decca Recordings, some made with the QHCF, others with Reinhardt and Grappelli or even Django by himself. This session featured a matured, strengthened QHCF, and an equally more sophisticated Reinhardt and Grappelli. Of the songs recorded for Decca in London, about half are original compositions, most notably, “Daphne” another Reinhardt and Grappelli original that would make it’s way into the cannon of jazz standards. “Daphne” is a cheerful, almost-sing-a-long lead by Grappelli’s soaring violin, which bookends first with a refrain and then a solo and refrain a long, scaling Django solo of remarkably pure trills and triplets. The consistency of rhythm, balanced velocity and tonal quality of the band in this recording show truly proficient musicians operating at their finest, and the poise with which Grappelli and Reinhardt show in their ability to sail just over them, not overcome them, and play into and off of each other with such lackadaisical ease and seeming carelessness, alternating matador and bull, is the mark of a fully realized musical relationship.

The collection visits the concurrent Paris Decca Recordings in Volume C, also from 1938 & 1939. The vast majority of QHCF recordings and Reinhardt and Grappelli work happened in Paris, London Decca being the obvious exception, but the same competent, talented band as the London Decca sessions is now back home, in familiar surroundings, and free to feel and play as only nationals can in the country of their birth. Paris Decca features most of the core members of the QHCF, but not billed as such. These recordings are again about half standard or popular song and half original. The interesting feature of this volume is that many of the songs are collected with multiple takes and assembled from dubs, which show the striking amount of improvisation from take to take of every song recorded by Django, Grappelli and the QHCF, no matter the structure of stature of a particular tune. The differences, at times, are astounding. The two takes of “Twelfth Year” (Version 1 & Version 2) another Reinhardt original, contain some of the most incomprehensibly brilliant jazz guitar anyone has ever heard, but both swing in completely different ways, both so strongly rooted in a unique feeling worlds apart from one another, solely due to Reinhardt’s varying expression of the intro rhythm, hinting refrain and color of his improvisations. Grappelli does the same with his solos, which close out the piece. Both artists defer first to the mood, and then to each other, to craft totally flawless and entirely spontaneous performances on each and every go-around, which, to put it simply, is jazz.

We travel back in time some to 1935 & 1936 for Volume D, more Paris recordings, and some of the most exciting of the collection, those made with tenor sax legend Coleman Hawkins. While Django mostly plays sideman in these sessions, his guitar is always very audible, and there are moments where he is allowed to shine. He does not disappoint, showing up many of the bands soloists and, at times, Coleman himself. On “Avalon”, the second song of the first session, Django performs a very brief but scalding solo which he slides into with insane, frantic grace, then immediately slows to a slender syncopated picking pattern, and finally speeds back into a reckless, but never out-of-pocket, flurry of strums. On “Stardust”, the only song of the second session, we see prominently Stephane Grappelli’s remarkable skill at the piano, a delight that is featured several times in the collection. Django also gets another solo, one of similar length, but of a slower lover’s tempo so that he can really unfold. Django chimes in with a small fanfare as Coleman commences the last four bars of his solo. Django then takes over with calm, collected runs that drip contemplatively like wax from a candle, scaling up and scaling down, arpeggiating and resolving, in characteristic style, with a flourish and not a flicker. 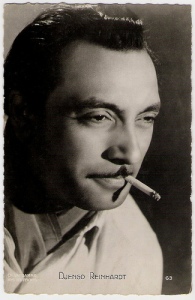 The collection concludes with Volume E, an “odds and ends” of sorts, featuring two sessions, the 1935 Garnet Clark and 1937 HMV recordings, none of which, in themselves, are particularly rare but the condition in which these recordings are presented is. Composed mostly of standards and popular songs, these sessions contain many songs of the hottest songs of the day, such as “Charleston,” “Ain’t Misbehavin’,” and “Body and Soul,” recorded by the classic QHCF personnel, but also three recorded by Garnet Clark and his Hot Club’s Four, which includes Django playing some of his few-and-far-between contract work. They play “Stardust,” as did Django with Coleman, but of the three songs they recorded, “Rosetta,” is the standout. At times sounding mysteriously like a precursor to Monk and bebop, Garnet Clark’s piano is a tumbling, lazy-eyed and delirious trip across the various octaves of the keyboard, separating the excellent solos of his various band members, but unfortunately relegating Django solely to rhythm work.

Of the 124 sides of this collection, many are some of the finest jazz ever recorded, but that is not to say that Django’s brilliance commenced, and ceased, here. He went on to record some of his best work and play in Paris and around the world through the Second World War and on into the early fifties. He settled in Samois-sur-Scene, a small French town in his later years, where he rarely travelled, but still played out consistently. He began playing the electric guitar. His final recordings show Reinhardt’s total comprehension, and appreciation for, the burgeoning bebop movement.

There is a myth that Reinhardt simply disappeared, vanished, never to be heard from again. That is not the case. Reinhardt collapsed of a brain hemorrhage at a train station in Avon and was pronounced dead on arrival at a hospital in nearby Fontainebleau. He was 43 years old. But as craftsmen die, their handiwork lives on. Like the furniture of the finest furniture maker, proud, aged, dignified, impervious, destined to outlive it’s master, so is the legacy of Django Reinhardt, carefully woven from so many unusual strands into a strong, totally unique and altogether incomparable body of work upon which can rest the weight of his influence, and the ears of scores of adoring fans for centuries to come.

This entire five volume set is available via Spotify.