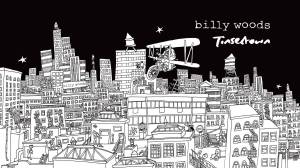 Thought on Tracks favorite billy woods hasn’t made much noise in 2013, but that’s all about to change.  Fresh off releasing my album of the year from 2012 History Will Absolve Me, woods is set to release a follow-up album July 2nd, entitled Dour Candy and fully produced by Blockhead (just like Illogic’s recently reviewed album Capture The Sun).  If the first single “Tinseltown” is any indication, Dour Candy should be one of the best hip hop albums of 2013, just like History Will Absolve Me was the year before.  As an Indiana resident, I could especially appreciate billy’s wordplay in this outstanding section:

“That’s why conventional wisdom don’t do nothing for me/ Marvin Harrison passed the iron to Dungy/ The quiet ones be the shooters/ He who dares wins and down here we the losers/ They robbed that white boy, cuz this ain’t Hoosiers/”

Not only does he have a clever line about Colts legend Marvin Harrison’s run-in with the law, but then he goes on to drop a Hoosiers reference the very next line.  My favorite rapper dropping back to back Indiana references, it doesn’t get much better than that.  Check out “Tinseltown” below and pick up the limited edition colored vinyl for Dour Candy due to drop in July over at Backwoodz Studioz.

Illogic and Blockhead seemed liked a natural fit as an MC/producer team from the time they announced they were working on an album a couple years ago.  Blockhead needed an MC to work with after Aesop Rock became his own producer and Illogic was looking for a producer to help him craft another classic like he and Blueprint did with his 2004 album Celestial Clockwork.  A few years after Illogic first reached out to Blockhead to work on a project, Capture The Sun is here, and it feels like an album from a MC/producer group that’s been together for years instead of a random rapper/beat-maker forced combo.

As an MC, Illogic has evolved over the years.  Thought provoking, poetic word play has always been a calling card, but throughout Capture The Sun Illogic relies less on cleverness and more on sharing hard earned life wisdom and truths.  “Capture The Sun” and “Beautiful Sunday” are back to back cuts that are probably more representative of the album than any other two individual songs.  Neither is overtly religious, but both focus on the power of positive thinking and the importance of seizing the day.  “Capture The Sun” was the first single and features Slug from Atmosphere on the hook.  I previously featured its great video for Thought on Tracks. Blockhead incorporates a couple of great vocal samples (a levitating wail on “Capture The Sun” and a soul refrain on “Beatiful Sunday”) that really drive the songs and help to demonstrate the complex art behind his layered, sample based productions.

“Bridges” is less than two minutes long but it packs a serious punch.  Illogic uses one verse to paint a vivid picture detailing his struggle with cancer as a youth, his ability to gain strength through becoming a husband and father, and finally his willingness to burn a bridge with ‘Fess’ (presumably former Greenhouse Effect member Manifest).  Blockhead’s simple infectious beat must have really lit a fire under Illogic because his verse is probably the albums best, opening with the gem “Talk is cheap, but a whisper is priceless/ I choose to take a leap of faith no matter what the price is”.

Blockhead’s production is so varied at this point in his career that Capture The Sun doesn’t sound like it was produced by one person.  His beat for “Justified” might be my favorite of the bunch because of the multitude of samples and shifts that the song utilizes while still maintaining a cool swing.  Illogic and Blueprint trade verses about the role race and racism have on the way the police do their job in America and show why they always make such a great team.  “Atlantis Depth” is another great contribution from Blockhead featuring some great jabbing guitar riffs and a creepy vocal sample that sounds like it’s coming from the depths.  Blockhead’s judicious use of horns on “Atlantis Depth” and throughout the album complement Illogic’s vocals perfectly, they always seem to come in at the right time.

Capture The Sun ends on a high note with the album’s best song “Lighthouse.”  Blockhead’s trippy, morphing beat sets the stage for Illogic to spit another of the albums best verses.  Opening strong with- “Showered in blankets of two dimensional soothsayers/ today’s truth sayers are stick figured visionaries/ There’s a gaping hole in the basket we placed our eggs in/ This explains the constant eggshell walking”, Illogic uses the his verse to gaze outward at the world around him and ask “where will we draw the line to ensure that future generations aren’t ashamed of the legacies we leave?”.  The song is capped off by a truly great appearance from singer/alternative hip hop Kristoff Kane that tails Illogic’s verse.  I’d never heard of Kane before this release, but he’s made me an instant fan with his work on “Lighthouse.”

While the lead-up EP’s that Illogic and Blockhead released last year were recorded at the same time as the songs from Capture The Sun, all of the songs that made the album have a level of polished complexity not found on the EP’s.  Capture The Sun is not a concept album, but Illogic’s spirituality is the bond that ties the sixteen tracks together.  Illogic has always used religious imagery in his music, but he seems more confident and open with his spiritual side than ever before.  Blockhead’s beats on the album sound like soul symphonies from the future.  Already one of the one most consistently great beat makers around, Blockhead’s craftsmanship and attention to detail on every single song on Capture The Sun make it the best produced album I’ve heard in 2013.  Go pick up the album up over at Man Bites Dog.

Illogic and Blockhead released two solid EPs last year with Preparing For Capture and Preparing For Capture 2.  Illogic’s verbose, internalized rhymes meshed perfectly with Blockhead’s soulful production.  While I enjoyed the EPs, the duo’s upcoming LP Capture The Sun is the main course and one of my most anticipated releases of 2013.  Below you can find the trippy visuals for the uplifting title track which features Slug from Atmosphere on the hook.  Pick up Capture The Sun when it drops in April on Man Bites Dog Records.