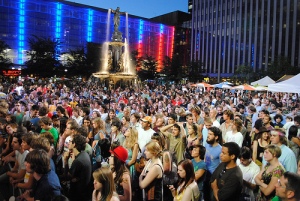 Austin, Texas rockers The Bright Light Social Hour return to Cincinnati for the 3rd time in the last year to kick off the MidPoint Summer Series at Fountain Square tonight.  Their first appearance was at last year’s MidPoint Festival along with a return show in January, and if that wasn’t enough, they will be returning for a fourth time in July for the inaugural Bunbury Musical Festival.  In case you’ve missed our previous coverage of the band, you can check out my preview of the January show featuring a live video of hit “Shanty” along with a Thought on Tracks exclusive interview.  In support of the group will be local acts Buffalo Killers and The Kickaways.

If you’ve never been down to see a MidPoint Summer show, this is the perfect one to get your feet wet.  A stage set up at Fountain Square sets up an incredible scenic venue right in the heart of downtown, and best of all, every show is FREE.   Oh, and The Bright Light Social Hour put on a fucking great show.  So there’s that reason to go too.  The acts on the series represent a wide variety of genres and styles so there is sure to be a show for everyone, not just the stuck up indie crowd like myself.  That said, the nights of the MidPoint Summer Series line-up that I find to be particularly intriguing and “must see” are below.  You can view the complete list here.

Also, the initial line-up for the always fabulous MidPoint Music Festival in September is scheduled to be announced next week on June 6th.   Early bird tickets are currently available for a steal at just $59 for 3 days of live music in venues all over OTR.

A few MidPoint Summer show you won’t want to miss: