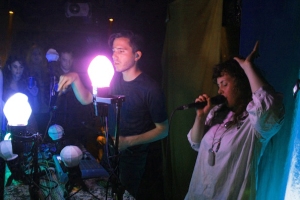 If you’re a regular reader here on Thoughts on Tracks, you know my love for Purity Ring.  And if you aren’t a regular reader here on our fun little blog, well then, I’ll just be honest and say you probably should be.  In any case, if you’re within a short car ride, megabus trip, riverboat or even walking distance to Cincinnati then you need to get yourself here this Saturday night for when Purity Ring blows the lid off Mayday in the eclectic Northside neighborhood.  Having gotten the opportunity to scope them in person earlier this summer, I honestly can’t think of a better way to get some fun on with a Saturday night and can promise some fun electronic vibes to go along with a killer light set.  Saturday Night.  “Fineshrine”.  A few beverages.  And maybe even one of Mayday’s famous hot dogs?  Yes, please, and thank you.

You can catch up with my review of the debut LP Shrines from early July if you missed it and check out a video below of my personal track of the summer live along with an interview with the duo.  Tickets are still available for pre-sale via Ticketfly and will also be available at the door for just $10. 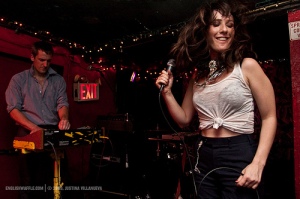 This Friday, the amazing month of Friday night shows at Fountain Square continues as a part of the MidPoint Indie Summer Series with Brooklyn based Class Actress.  The project from the mind of Elizabeth Harper is currently still touring on their debut LP in 2011’s Rapprocher.  A combination of electronic driven dance pop beats and Elizabeth’s gorgeous voice, the group brings a fun vibe, literally and figuratively, to the “Weekend”.  Below, you can preview not only the song just named for the dance floor, but also see Elizabeth slow it down acoustically with “Adolescent Heart” courtesy of Big Ugly Yellow Couch.  Whether we’ll get a mix of both styles remains to be seen, the one thing you can count on is that you’ll get your Friday started off right by checking out this FREE show.  Class Actress goes on at 9:30 PM, with Vito Emmanuel and Crown opening at 7.

I like to think of the Queen City as the hidden jewel of the Midwest.  We tend to be a city ignored by the East Coast driven media except for when bad things happen.  So naturally Cincinnati is often thought of in a negative light.  When I left Indianapolis and moved back to Cincinnati almost two years ago, it came with great reservation at the time even though I grew up in a northern suburb.  Cincinnati and its urban, cultural areas were an enigma…I really just didn’t know what to expect.  As I moved into the area and began discovering the countless fabulous restaurants and neighborhood pubs in and around the renaissance occurring in Over the Rhine, I eventually came to the realization that Cincinnati is a fabulous place to live while in your mid twenties.

And perhaps my favorite event that takes place here every fall is the highly underrated MidPoint Music Festival held all throughout OTR. This year’s festival will take place September 27-29.  Last year brought about my first three-day experience at the Thursday through Saturday festival and I woke up on Sunday with a massive hangover and a smile on my face.  While last year’s lineup was stellar, the team at MidPoint may have just outdone themselves with the first announcement of initial lineup yesterday.

Wow.  That’s about all I can say.  A limited number of Early Bird passes are still available for just $59, so if you’re interested act fast as the Loyalty Passes already have sold out.  Christmas came early this year Cincinnati. Check out some of the links beneath the post for a taste of what’s to come.