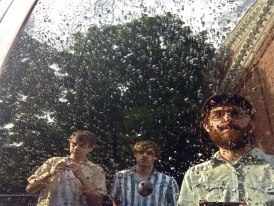 Brooklyn’s Woods released a helluvan album last week that fellow ToT contributor Brett has been championing among our circle of friends. Below, you’ll find a live clip of Woods performing the lead-off, title track “Bend Beyond” at Storm King Art Center earlier this summer.  The band takes the song to a jammier, spaced out frontier that is held in check on the album version. The footage was captured by the talented folks at Windows Have Eyes. Those viewers lacking the patience for dissonant, atmospheric layering may wish to jump to the 3-minute mark, but I strongly deter you from doing so. Pick up your copy of Bend Beyond from InSound.