Posts from the ‘Concert Review’ Category

Editor’s Note: This story was originally published on defunct, Central Indiana arts website Sky Blue Window on September 1, 2014. Some content, style and formatting may differ from the original version.

“What can we do to reintroduce the city and Broad Ripple to this river?” WARMfest organizer Dan Ripley asked me during an interview earlier this summer. “Why is it so neglected and why has Broad Ripple lost its identity? Today, it seems more relevant than ever. Broad Ripple is known for 2 a.m. bar business, but why wouldn’t it be known for these daytime greenways?”

For Ripley, the restoration and reinvigoration of White River is the higher purpose and mission of WARMfest. While Ripley is passionate about the prospect of a successful music festival in Indianapolis, he won’t deny that, for him, WARMfest largely serves as a vehicle to attract locals and visitors to the shores of his beloved riverbank. So Ripley re-organized the layout of stages and vendors to increase the focus on the water this time around. “Against all of my better judgment, we turned our back on the river last year,” Ripley said of WARMfest’s inaugural layout.

The vendors from Indie Arts and Vintage Marketplace have shifted from their position in the middle of the park to a location along the paths at the park’s edge, overlooking the water. The main stage has been turned around so the sound flows into the river itself. The moves are subtle, but effective. 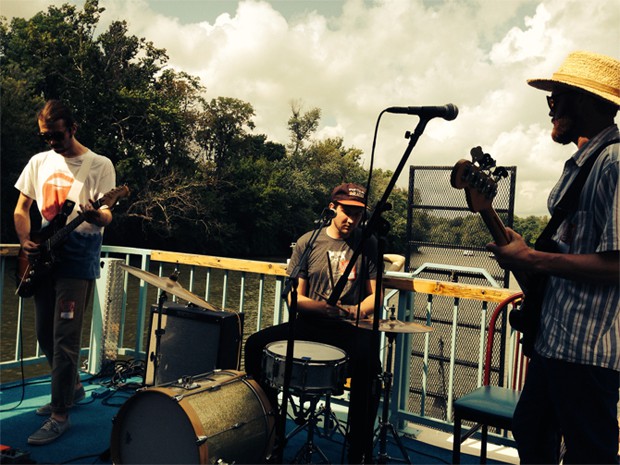 With the festival’s focus in mind, I decided to spend an extra 10 bucks to catch the Wapahani River Session from Bloomington three-piece Sleeping Bag yesterday. “I hope you like this kind of music, because it’s a long swim,” lead singer Dave Segedy quipped after the band finished its first song and our ship cruised steadily away from Broad Ripple Park. Segedy joked that the ship had been renamed “S.S. Sleeping Bag” for the afternoon.

The two-story paddle boat used for the Wapahani River Cruises is actually named Perseverence II and is operated seasonally by the Broad Ripple Boat Company. It was named after its predecessor who roamed the White River more than 100 years ago. After moving to Morse Reservoir as “Star of Cicero,” the ship was abandoned and sunk. Captain Michael McRee salvaged the vessel and hauled it to his shipyard. “All this wood that you see here. It all came off of my brother’s property up in Cicero,” Kathleen McRee said of her brother’s boat. He launched the restored boat during the summer of 2010.

While we cruised along to the sedated garage rock stylings of Sleeping Bag, speed boats, pontoons and jet skis whizzed by from every conceivable direction, towing knee-boarders and skiers. Most offered friendly honks and waves. The nearby homeowners sat along the shoreline in folding chairs, taking in the sounds. Thanks to the removal of massive thickets of invasive honeysuckle along the shoreline prior to last year’s WARMfest, Broad Ripple Park and WARMfest’s main stage are now visible from the river itself. Thanks to the dedicated sound crew handled by The Hi-Fi, they gutted out the heat and humidity without complaint the past few days so that everyone on the river and along its shores could hear it as well. And props go to longtime local musician Dave Jablonski who ran sound throughout the festival.

“Right now, that would be a mucky, muddy bottom with weeds growing in it, but if you remove the snags and let the current flow through it, it washes out that muck and you would have a nice sandy, clean, rocky bottom,” Ripley said. “So, if you help the river, it will maintain itself.”

Today, Perseverence II will host three more Wapahani River Cruises to close out WARMfest. If I had to pick one, I would recommend the intimate set from local songwriters Vess Ruhtenberg (The Pieces, The Last IV and too many other bands to name) and Christian Taylor (Ampersand Blues Band) at 3:15 p.m. It is community day at WARMfest with an overall ticket price of just $10. Purchase tickets online or at the gate.

The various chat rooms of digital listening lounge Turntable.fm will play host to several dozen musical guests throughout the month of December. Each weekday, a different artists will be on hand to chat and play tunes with fans in one of the site’s rooms. A tentative schedule has been announced, along with the lineup listed in the picture above (click on the image to view full-size). The lineup is eclectic, with appearances planned from everyone from Work Drugs to Umphrey’s McGee. An unlimited number of users will be able to listen and observe, however only the first 200 fans to enter the room will be able to chat directly with the band.

The experiment is the first for the social music platform. Turntable.fm unveiled a suite of updates last month. Billy Chasen, the site’s CEO and co-founder, told Mashable that the updates were designed to allow the rooms to host much larger volumes of users. Obviously these updates were necessary to accommodate the type of response that the site is hoping to see from initiatives like the winter festival.

The start-up has experienced its share of ups and downs since its launch last year. Turntable wowed the tech community by attracting 140,000 users in its first month and 400,000 after two. Since then, interest has waned. Chasen now claims a user base of more than 1.2 million with hopes that opportunities to reach large digital audiences will pay dividends in the future.

This Friday marks the 11th annual Tonic Ball in Indianapolis’ Fountain Square. The event showcases nearly 50 local and regional acts at three separate venues. Each year, the Tonic committee selects three acts whose material performers are asked to cover any way they see fit. This year’s event will feature the music of U2, Stevie Wonder and quintessential British invaders The Kinks.

All proceeds from the event help to fund local hunger-relief organization Second Helpings. The evening kicks off with a visual art exhibition at New Day Meadery at 5 PM. Music is scheduled to begin around 8. Check out the full slate of musical performers below. Tickets are $25: purchase online, by telephone (317-632-2664), or in-person at LUNA Music. The event typically sells out, so don’t sleep on an opportunity for a fantastic evening in support of a worthy cause.