Editor’s Note: This story was originally published on defunct, Central Indiana arts website Sky Blue Window on July 31, 2014. Some content, style and formatting may differ from the original version.

Last week, I was scrambling around my apartment, assembling necessities for a weekend in Louisville at Forecastle music festival. As I printed tickets, gathered clothes, and iced down a cooler of beer, my mind drifted toward Indy’s recent festival forays and where cultural events fit into the landscape of a town whose reputation revolves around sports. To gain insight, I sat down with local concert promoters and other stakeholders to answer several questions. Among them were: Is a top-tier music festival necessary for a healthy music scene in a city? Is a thriving music culture central to Indy’s image nationally? What are the latest developments? What are the possibilities going forward?

“We have a pretty packed calendar of cultural events currently being offered, whether that’s concerts at The Lawn at White River State Park to Dig-In from Irish Fest to Indy Pride,” says Chris Gahl of Visit Indy. “It’s very eclectic and often surprises our visitors when they see the lineup of events. We feel confident in what we’re currently offering, however there’s always room to grow.” 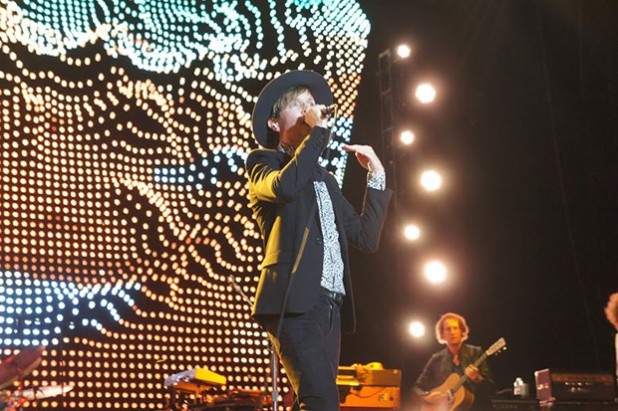 One such sign of growth is WARMfest, Indy’s latest and most substantial attempt at a rock festival with regional reach. Dan Ripley launched the event last year, incorporating Broad Ripple Music Fest and Indie Arts & Vintage Market Place into a four-day showcase of music and artisans in Broad Ripple Park. For Ripley, WARMfest’s larger mission aims to fund the restoration of White River’s banks, removing invasive honeysuckle and other debris that has limited access to the waterway for years.

“For decades, Broad Ripple’s identity was tied to the park and the amusement park, and public docks, and canoe liveries and social gatherings on the river,” Ripley says during a recent boat ride along White River. “When you look at all of these things, I sort of justify my vision as not being hair-brained. People say, ‘Well, that will never work.’ It did work. It worked for decades.”

A look at more established regional festivals should provide Ripley with a bit of optimism. In 2013, Forecastle conducted a financial impact study to track the monetary windfall to Louisville’s tourism and hospitality sector. The results were impressive. Each year, tens of thousands of energetic fans spend an average of $98 per day, pumping a cumulative $14 million into Louisville. Last year, organizers invested $460,000 on local employment. Like WARMfest, Forecastle operates a nonprofit arm, which funds environmental conservation efforts in both Kentucky and South America.

“I think one of the reasons that Forecastle has been so successful and continues to be a success is because we didn’t come out of the gates big,” says Forecastle Media Manager Holly Weyler. “We started small. Like really small. Like 100 people small. So it has been an organic, grassroots growth that’s happened over the last 13 years that got us here.”

A recent Indianapolis festival with humble beginnings is Cataracts Music Festival, launched by Jacob Gardner in several backyards off of Morris Street. in Fountain Square in 2011. Gardner pulled off the event without any formal sponsorship agreements, just the support of a few, eager, like-minded friends. “I wanted it to light a fire under people’s asses to realize that you can do this anywhere,” he says. “You can do this in your front yard. It’s called DIY for a reason. Do it yourself. Don’t complain about not having a show space. Go find one. Go create one.”

Cataracts spent two years on Morris Street before moving to Garfield Park in 2013 after police declined to issue Gardner the necessary permits to hold the event at Fountain Square Brewery, citing noise complaints after the 2012 event. Those circumstances led Gardner to take a year off and regroup in 2014. “If somebody could see that we’re just doing this so that Indianapolis can have something to hold onto, then I would keep doing it,” he says. “As it is now, I’m letting it rest and fall where it needs to naturally.”

“We can do Cataracts again,” Gardner says. “We just have to appropriate funds correctly. Even if I have to pay for the majority of it, I’ll do it. But it’s gotta be in a really unique place. It’s gotta be in the right setting. It’s gotta be at the right time. The right bands have to be coming through. I would really like to do it in houses again, and scale it back. Maybe two stages with 15 bands all day or something like that.”

Josh Baker, who manages MOKB Presents and local events website Do317, recognizes the value that people like Gardner bring to Indy. “We need more younger music promoters who want to go out and do shows and take risks,” he says. “We need people who want to open more venues or change venue formats to be centered around live music. We need more people buying music and supporting bands. All of those things are catalysts and vital to a thriving music scene and I think a market has to have a thriving music scene in order to have a successful festival.”

Baker oversaw talent-hiring and filled a variety of other roles during the inaugural WARMfest. He chose to forego involvement this year to focus on opening a new Fountain square venue, The Hi-Fi. He has a long history with music festivals on a local and national level. He was the primary force behind Midwest Music Summit, a SXSW-style conference held in Indy in the mid-2000s, Monolith Music Festival at Red Rocks in Colorado, and other events like First Friday Food Truck Fest at Old National Centre. “The city is the direct benefactor of a festival,” Baker says. “The festival takes all of this risk and spends all of this money on marketing on behalf of the city and their brand. I think there’s something there from a city and tourism standpoint. They should commit a financial investment into some of these events to help them grow, because the city will see the rewards.”

Gahl echoed Baker’s assertion, saying, “To ensure the long-term stability of tourism in Indianapolis, you have to have a healthy mix of convention tourism and leisure tourism. Leisure tourism is driven by sporting events and cultural activities. We can’t get enough of those. We need to keep feeding the funnel and coming up with new events, new ideas, and new spins on existing events to make sure that Indianapolis is fresh and positioned as not only a convention town and a sports city, but a cultural hub.”

For his part, Ripley believes the necessary pieces are in place in Indianapolis. “There are plenty of local promoters,” he says. “There’s a lot of people involved in community development. There’s great support for this music community and there’s a million people in this county. That’s enough.”

The final WARMfest “Warm-Up” concert will be held in Broad Ripple Park on Sunday, August 10, just a few weeks prior to the festival itself. The free, all-ages event will feature performances from Hyryder, Chad Mills, and a kid-friendly set from Ruditoonz. To learn more about WARMfest, scope SBW’s coverage of the lineup announcement and keep your eyes peeled for more in this space in the coming weeks.