Home is where the art is: A profile on Stephen Peck

Editor’s Note: This story was originally published on defunct, Central Indiana arts website Sky Blue Window on June 17, 2014. Some content, style and formatting may differ from the original version.

On a recent Wednesday afternoon Stephen Peck greeted me at his door with a warm smile, a handshake, and an apology over the messiness of his humble abode at 1015 Olive St., in Fountain Square.

It’s not an exaggeration to describe the scene at “The Speck House,” as friends have affectionately dubbed it since he moved here in early 2011, as if somebody had recently detonated an art bomb somewhere between the kitchen and the front door. Art supplies, various musical instruments, scrolls of collaborative drawings, half-finished projects, paintings and sketchbooks litter nearly every available surface of the home’s interior.

The walls serve as a sporadic history of Peck’s career as a designer, screen-printer and student of art. It’s a bit overstimulating at first glance, but before long I realize much of the activity around The Speck House tends to be this way. 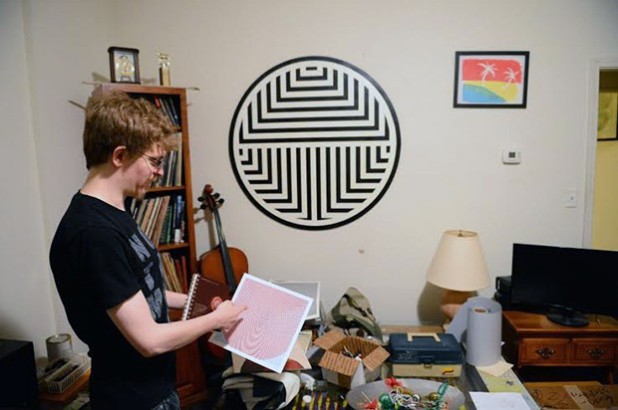 A room to the left of the front door houses Peck’s drum kit. In the corner opposite of it sits a pile of boxes, stacked nearly 3 feet high with “art night” relics. Giant sheets of folded canvas have shellacked themselves to other discarded expressions. Peck digs through this hulk, occasionally unfolding larger works to describe the circumstances and individuals who created them. He reads each expanse of canvas as if its hieroglyphs unlock the story of 100 memorable evenings, which, for him, they do. Art night is a Thursday evening tradition, where Peck invites whomever is available and interested to create at his house.

“I don’t know that I really have a start date or anything,” Peck says. “I didn’t really know that many people down here. I would go to shows and run into people, and I knew Thursday nights worked for me, so I would say, ‘Hey, come out and let’s hang out on a Thursday. Let’s make art.'” Peck’s experience as a drummer and his inclusive attitude toward visual art quickly made his house a favorite of the likeminded twentysomethings that have flooded Fountain Square in the last few years.

“There are some art nights that are just wild,” Peck says. “They’re rare and beautiful. I don’t know. It’s a unicorn that arrives. Suddenly, there’s 30 people here all hanging out, and it’s awesome. It’s just everybody from the neighborhood who wasn’t doing anything on a Thursday and came over.”

Peck is an Indy native who attended Columbus College of Art & Design (CCAD) after graduating from Heritage Christian. After college he moved to Seattle where he opened a small screen-printing shop. “It was not doing that well,” Peck says of the venture. “I had a really good summer of success the first summer I was out there, and then that kind of died down.” As a result, he returned to Indy to work at The Art Press. That experience was short-lived, the details of which Peck refrains from discussing. He quickly found work at Broad Ripple’s Teeki Hut, where he continues to work part-time along with local start-up Pack Printing.

Peck developed a taste for screen-printing while promoting bands he formed during high school, but his passion for art grew out of necessity at an early age. “I have half a heart,” he confessed casually toward the end of our interview. “Actually, I had three things wrong with my heart that individually should’ve killed me, but because I had all three, I’m okay. It balanced out … Sports were never an option, so that’s why I got into music and art. I can do that and it’s fun. Why do I need to go run around all the time?”

In December, Peck had his pacemaker replaced, a surgery he describes as minor compared to three more significant procedures at different stages throughout his life. Though he doesn’t hide from his heart problems, he tries not to wear them on his sleeve. “I used to talk about it too much,” he says. “It would bring people down and make other people’s problems insignificant, which isn’t fair … [My heart] really isn’t as big of an influence on how I live anymore. I’m as healthy as I’ve ever been right now.”

Rather than dwell on his limitations, Peck creates with reckless abandon. In the last year, his focus has shifted away from screen-printing toward more substantial optical-art pieces. He credits the shift with a revival of interest in his design work for local musicians, concert promoters, record labels and others. “I’ve done a lot of concert posters recently,” Peck says. “The thing is, no one for about a year asked me to do a poster, and I think it’s because I’ve changed how I’m doing my art. I feel like people don’t really know what I’m up to. It’s like, ‘Oh wait, we do still like the art you’re making. Now we’ll ask you.'”

His initial fascination with op-art flourished while at CCAD. “The Columbus Museum of Art is basically on the CCAD campus,” he says. “They had this op-art exhibit with Bridget Riley’s ‘Fall.’ It’s basically a 10×10 foot painting, and she did it all by hand. So, you walk up and there is this giant wall of black-and-white lines. I walked through it every single day to and from class. There and back, just so I could see this painting. There was a whole exhibit of op-art stuff, but that’s the one I really remember.”

For his op-art paintings, Peck begins with an Illustrator file that he often creates from sketches. Once he has a perfect version that he’s satisfied with, he cuts the design in vinyl, which he uses as a stencil. “So, it ends up being paint-on-paint at the end of it, but I’m creating it as if it’s a stencil and then I peel away the vinyl,” he says. “So, I paint the board black. Then, I put down a red stencil and I paint the whole thing white. Then I peel away the stencil, and you see the black underneath.” While this process defines Peck’s more substantial op-art paintings, he is also experimenting with other media — everything from video to custom coffee tables. 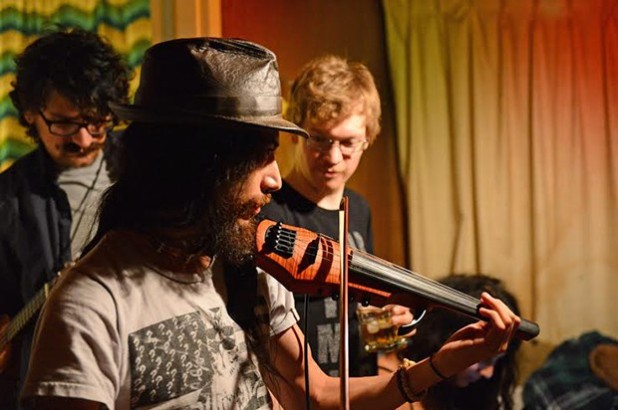 Peck is obsessive when it comes to perfecting his designs, but his planning for the future remains much more open-ended. He has flirted with the idea of graduate school. In the meantime he plans to pursue more gallery opportunities for his op-art work and expanding his freelance design business where he can. More than anything, Peck appears content with his life in Fountain Square, making music and art with his friends every Thursday. “I’ve never had a terrible art night,” he says. “The worst it can be is that it’s just me, and I’m just making art by myself — which is still great.”

Stay up-to-date with Peck’s artwork work on Tumblr and Facebook.  Come by The Speck House on June 19th for his first “directed Art Night,” when he will guide guests through the subject of “back drawing” — literally drawing the backs of people. Or drop by for his third annual Slip N Show on July 13, with live music from Absonites, Bonesetters, BYBYE, Cat Crap Fiasco, Chris Dance & The Holy Echo, Derek Johnsongs, Jessica Albatross, Benny & The Planes, Brian Jones & The Misadventure, Bait & Tackle Tabernacle and more.