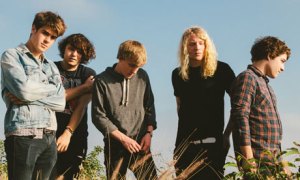 I’m a proud early supporter of suburban Chicago punks The Orwells. The band’s debut* LP, Remember When, hit on all of my guilty pleasures and was on of my favorite albums from 2012. Debut comes with an asterisk the band mentions two prior LPs that they released independently as freshmen and sophomores in high school. The Orwells will release a new EP called Other Voices on June 30. The release is currently available for streaming via Pitchfork Advance.

The group recently dropped by Chicago Public Radio’s Studio 10 for an hour-long segment featuring interviews and live performances. The music alone is worth the price of admission (free). However, during the interview segment The Orwells speak candidly about borrowing from The Stooges’ self-titled LP and getting banned from playing their hometown’s York High School for covering Velvet Underground’s “Heroin” at a fundraiser. Not to be missed. Listen and download the performance, in its entirety, below. Pre-order your copy of Other Voices from UK label National Anthem.