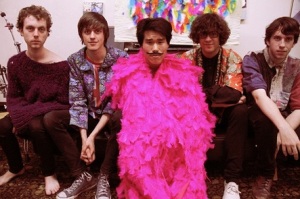 We featured the New Zealand psychedelic pop quartet Sherpa in a Band to Watch post last May, on the strength of their debut LP Lesser Flamingo. The band struck a chord with the irresistible synth line and power pop sensibility that drove lead single “Lunar Bats.” The track earned the quartet enough exposure to play several gigs alongside Real Estate by the end of the year.  This week Sherpa returned with a daffy video for new single “I’m Happy Just to Lie.” The video finds the band taking its penchant for low budget ridiculousness to new, more fabulous heights.

Sherpa had this to say about the video:

“Sherpa’s latest single ‘I’m Happy Just To Lie’ is a song of two
halves. The first half is a loving plea to revel in the euphoria of
the now, the later half a collision between the choices and their
consequences. In the same vein the music video’s journey begins as a
over stimulating trip through a hyped $2 Store-chic fantasy universe.
As sharpness of the real world slowly fights its way to the foreground
as the two worlds collide though the monsters of the fantasy world are
left to rampage the real world.”