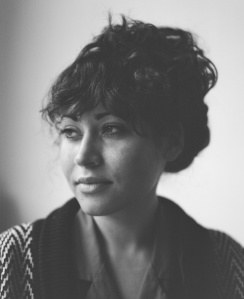 Since humans first grew capable of grunts and knee slaps, we have handed down songs from generation to generation. Along the road, the songs bend and take on entirely different incarnations, offering only glimmers of their original selves. We break them down and reconstruct them to better reflect and process our present environment. No matter how far a song may stray from its first breath, somewhere deep within lies its essence or soul – for lack of a better term – that is carried by each musician who paid it forward.

Below, watch a video of Indianapolis native and vocalist Hanna Benn performing her take on the gospel classic “The Lonesome Valley” at Seattle’s Land Management. A version of the track by fabled gospel quartet The Fairfield Four gained a wider audience in recent years after its inclusion on the soundtrack for O Brother, Where Art Thou?  Though radically different, both versions prove stirring.

Benn is a music composition grad from Cornish College of the Arts and a member of the experimental, orchestral pop outfit Pollens. The Seattle band released its debut album, Brighten and Break at the end of September. The LP weaves complex vocal arrangements around deceptively simple melodies. It’s cerebral in a way that’s reminiscent of Conveyor’s debut from early last year, but much less quirky. Listen to the band’s single “Helping Hand.”

Benn returns to Indy this Thursday for a solo gig at White Rabbit Cabaret. I’m particularly excited as the bill also features local songstress Kristen Newborn and her project Ko. Both singers work in a similar space, looping vocals to create polyrhythms that serve as instrument as much as lyric. They’re also both North Central grads and talented as hell. I’m anxious to see whether any friendly rivalry fosters some inspired performances. Organ Grinder and Caleb McCoach will round out the line-up. For more information visit Do317. Check out Benn’s take on “The Lonesome Valley” below and grab a free download of some live recordings via Bandcamp.