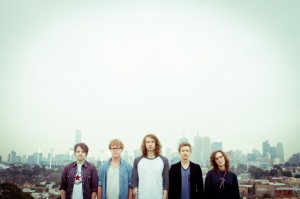 We appreciate the rough-hewn abrasiveness of an obscure rock song as much as the next blog, but we also have a tender spot for the craftsmanship required to churn out a pristine pop tune. Melbourne’s Buckley Ward falls into the latter category on their latest single “Two Strands.” The understated bounce of the rhythm guitar and immaculate harmonies found on “Two Strands” have a familiarity that will feel as if you’ve been toting this track around in your back pocket for months. Its is the most recent single from the band’s sophomore LP So Pretend, released back in April. Listen to the song below.