As is readily apparent, we are vinyl enthusiasts around these parts. As such, we’re excited about the annual Record Store Day 2.0, held as part of the retail behemoth Black Friday. Fighting off bloodthirsty mothers in search of 2012’s hot holiday toy may serve as an excellent exercise in shedding Turkey-day calories, but it proves dangerous and ill-advised. Instead, we recommend a stroll to the nearest record store for a friendlier Black Friday shopping experience. The holiday is marked by a slew of special, limited-edition releases that are sure to brighten any bookcase. Below, we’ve highlighted five can’t miss Black Friday exclusives.

Nirvana’s 1992 compilation release of demos, cover songs and radio performances has received a full remastering in honor of the album’s 20th anniversary. Incesticide is available on 180 gram vinyl  at 45 RPM for the first time ever. The release features the Kurt Cobain’s artwork with lyric sheet art housed in a deluxe gatefold sleeve. Gold foiled, stamped and individually numbered. Watch a video for the album’s lone single, “Sliver” below.

Miles Davis’s 1957 release Miles Ahead came on the back of his groundbreaking Birth of the Cool sessions, and represented the artist’s first foray into orchestral jazz in collaboration with legendary jazz pianist, arranger and composer Gil Evans. The duo would go on to record a string of veritable masterpieces for Columbia in the form of Porgy and Bess, Sketches of Spain and Quiet Nights. Listen to where the relationship drew its first breaths on 180 gram vinyl recorded in MONO. Both Porgy & Bess and Sketches of Spain are also receiving Black Friday reissue treatment.

These rare 1966 recordings feature early, alternate versions of what would later comprise the legendary debut album The Velvet Underground & Nico. The sessions were recorded at Scepter Studios, housed within the warehouse space that would later play home to Studio 54. The album is available on limited edition, 180 gram vinyl, gold foil stamped and individually numbered.

These recordings come from a 2002 live performance by the legendary Clash frontman and his backing band The Mescalaros. The concert – held as a benefit for striking firefighters – is notorious among Clash aficionados, as it featured Strummer on stage with former bandmate Mick Jones for the first time in nearly 20 years. By this time, Strummer’s musical tastes had ventured far from the Englishman’s punk rock roots, influenced heavily by the Afrobeat rhythms, jam bands and electronic music that had risen to prominence around the turn of the century. 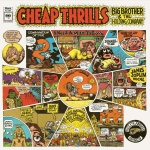 Cheap Thrills was the sophomore LP from Bay Area psych-blues outfit Big Brother & The Holding Company and the band’s last with Janis Joplin as lead singer. In 1968, the album rose to number one on the Billboard pop charts, where it sat for eight weeks. The track listing features several of the songs that would define Joplin’s career, including “Ball and Chain”and “Piece of My Heart.” The album’s cover art was illustrated by legendary underground cartoonist Robert Crumb. Listen on 180 gram vinyl, recorded in MONO.