Track: Talk Talk “After the Flood” 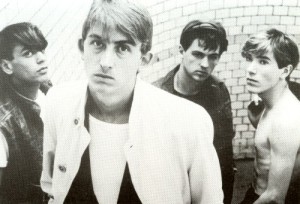 Most of last night was spent camped in front of my computer as updates of the havoc Hurricane Sandy wreaked upon the East Coast flooded my news feed from every conceivable angle. Failed backup generators at NYU’s hospital. Blown transformers on 14th Street. Walls of water rollicked through the ongoing construction site at ground zero. Powerful images of lower Manhattan sheathed in darkness.

As I’m prone to do on momentous occasions – or occasions of any kind really – I found myself in search of a soundtrack. After a bit of rummaging, I settled on Laughing Stock, the brooding, farewell masterpiece from British post-rock pioneers Talk Talk. Released in 1991, the album resides at a gorgeous intersection of avant garde jazz and art rock, completing the band’s metamorphosis from its synth pop origins a decade earlier. Laughing Stock has a pervasive placidity that seemed to resonate with the opaque images coming from New York.

The nearly 10-minute “After the Flood” sits at the center of this six-track release. The song begins at a slow amble, eventually building around the dampened vocals of lead singer Mark Hollis. A crescendo of distorted feedback from the synthesizer creates a visceral tension in the middle of the song. Just when it begins to feel as if the track is going to collapse from the pressure, the synth recedes and the interplay between Hollis and the keys returns to bring it home.

Laughing Stock received a full vinyl reissue from Ba Da Bing! Records in October of 2011. In the two decades since its initial release, Talk Talk has remained a source of inspiration for a broad cross-section of musicians. Austin, TX’s Shearwater and fellow Brits Wild Beasts are two disciples whose recent work comes to mind. However, Talk Talk has been covered by everyone from Weezer to No Doubt. Their influence is limited by neither time nor genre. Listen to “After the Flood” below.