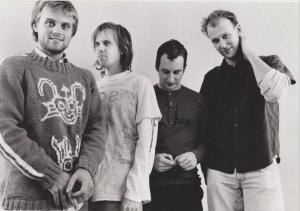 Dated tracks delay the flood. I enjoy reaching back in the collection to find that one song that grabs me so tightly that it makes it impossible to jump back in the now. These moments help to give validation to my growth as a listener.  While my musical interests wonder as new introductions are made, it is these reconnections that help to maintain my sanity. These tracks provide simple reminders to slow down and appreciate. Reengaging with an old favorite is a powerful escape. These experiences breed a certain level of intimacy that offers tremendous moments of reflection. As my head begins to sink slowly under the water I find a moment to breathe and show my admiration for “Wrong” by 1990s indie rock cornerstone, Archers of Loaf.

This song was just one piece of their magnificent debut release Icky Mettle.  This album was recorded in the band’s home of Chapel Hill, NC and released in 1993.  This record is a solid collection of songs painted by the heavy fuzz of distortion.  While an argument can be made for each of the thirteen songs on this record it is “Wrong” that garners my full attention.

This song mesmerizes me because of its dedication to simplicity.   Singer, Eric Bachmann’s lyrics are both straightforward and easy to absorb.  The line, “I’m just being honest, it’s the least I could do” sticks and provides a courage cry for those trying to break it off.  Strong rhythms of distortion ring out and can easily remind the present day listener of bands like Yuck and Surfer Blood.  This track is meant for repeat listens and can serve as a confidence builder for those who might be sinking because of someone else.  Get a lift on Tuesday and check out a song and a band that influenced some of the best current indie rock projects.