Fresh Track: Dusted “(Into The) Atmosphere” 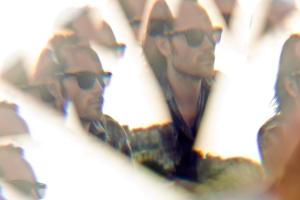 Dusted is the new project of Brian Borcherdt and Leon Teheny.  Borcherdt spent the better part of the last decade braving new territory with the Toronto electronic outfit Holy Fuck.  Before joining Holy Fuck, Borcherdt was part of a little-known band named By Divine Right featuring Broken Social Scene’s Brendan Canning and some chick named Leslie Feist.  Taheny is better known for his work as a producer than a musician, working with Final Fantasy, Rituals and Bruce Peninsula among others.

The duo came together to record their debut LP Total Dust in a converted garage, breathing new life into songs that Borcherdt had penned while on the road.  Listen to Dusted’s debut track “(Into The) Atmosphere” below.  Atmosphere is the operative word here, as this song is shrouded in jangling guitars, contrasting percussion and layers of lo-fi vocal tracks. Pre-order your copy of Total Dust, due out July 10 on Polyvinyl Records.