In The Dust #20: Television ‘Marquee Moon’

Once a week In The Dust rolls up its sleeves and digs to the back of the rack to find that record, the one you never knew you always wanted, the one that’s lost but not forgotten. (Listen via Spotify) 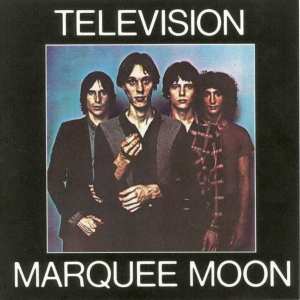 Now Little Johnny Jewel / Oh, he’s so cool / He has no decision / He’s just trying to tell a vision / Some thought that this was sad / And others thought it mad / They just scratching the surface / JJ can do the floor kiss

These are the first words the world ever heard from the band Television, singer, guitarist and songwriter Tom Verlaine issuing them in a confident, semi-sarcastic narcotic howl over the seemingly lost, drifting flourish-and-drone of lead guitarist Richard Lloyd, the low-rock rumble of Fred Smith’s bass, and prescient, pseudo-disco-proto-punk-funk drummer Billy Ficca.

Unabashed students of music as art, and artists themselves, for Television the looking glass, as shown is the above excerpt from “Little Johnny Jewel (Parts 1 & 2)“, always pointed inward.

“Little Johnny Jewel (Parts 1 & 2)” was released in 1975 on Ork Records, two years before Television’s debut album, Marquee Moon, would see release. Prior to the “Jewel” 7-inch, Television had spent much time cutting their teeth at the fabled CBGB’s, sweet-talking owner/proprietor Hilly Kristal into a regular spot, and even building the venue’s first stage for him. CBGB’s was, of course, the epicenter of the early 1970’s New York underground, jettisoning acts like The Ramones, The Patti Smith Group, The Talking Heads, The Cramps, Blondie, and Richard Hell & The Voidoids (an original member of Television and long-time friend of Verlaine), among many, many others.

A place for art, music, fashion, and ideas, CBGB OMFUG was more than just a music venue featuring “Country, Bluesgrass and Blues and Other Music For Uplifting Gourmandizers”,  it was a spring board, launching rock’s most significant and revered artists of the last 40 years.  Contrary to the group’s popularity at-large when comparing them to almost-ubiquitous acts like The Ramones or The Talking Heads or Blondie, Television was at CBGB’s center.  A mélange of all things undeniably great about the scene’s music, incorporating a 50’s rhythm and wop similar at times to The Ramones, re-appropriated disco-funk and artful aesthetics à la The Talking Heads, poetic enigma akin to that of The Patti Smith Group, and beyond, soaking up everything from the psychedelia of deep 60’s cult and audiophile/in-crowd favorites like The 13th Floor Elevators, Love, The Count Five, and The Velvet Underground, and even Buffalo Springfield and psych-era Rolling Stones.

This reverent gaze over history coupled with the constant friction of the well-defined and stubbornly defended musical ideologies of Verlaine and guitarist Richard Lloyd spawned one of the most structurally sound, carefully devised and artfully realized sounds to emerge from the New York underground in the early 1970s.  A complex, intertwining, guitar-harmony heavy assault with an asymmetrical, ambitious attitude and dangerously danceable edge, a sound that was first heard fully-realized on their iconic, critically acclaimed and still criminally underappreciated debut album, 1977’s Marquee Moon.

Initially planned to be recorded with Rudy Van Gelder (A Love Supreme by John Coltrane, and countless Blue Note classics) at his New Jersey studio, the album ultimately made it to tape at A & R in New York City. A fitting location for a band that exemplified what made the New York underground scene one to remember: an unknown-star-studded explosion of outrageous creativity (for example, Marquee Moon’s cover features a photo of the band taken by Robert Mapplethorpe).

The album is a balanced eight tracks, four on Side A, four on B, but clocks it at a solid 45:49 and takes off like a rocket.

“See No Evil”, the album’s unbelievably strong debut track, makes the unique, methodical guitar interplay that drives Television immediately apparent. Verlaine’s rhythm begins and is soon joined by Lloyd’s lead, the two strikingly different in complexity, one simple and repetitive, one frenetic and scaling, but both parts equally infectious and appealing in their juxtaposition, fusing a gruff, scuffed up, New York minimalist cool with bright, provocative, shreddy, glam-like waves of melody, like Rothko colliding Frank Stella and Jackson Pollack in a glitter factory next to the Bauhaus.

“And others thought it was mad….”

The album’s centerpiece, the aptly titled, “Marquee Moon”, begins much the same, but the vibe is completely different: introspective, reserved, yet chaffing against its restraints, bubbling, boiling and begging to be unleashed. Modish charm permeates the tensional structure, constantly building, constricting, and expanding, releasing, like the pump of pendulous arms up and down, faster and faster, on the undulating dance floor of a 1960s London loft, or in the song’s spacier moments the dazed, hazy and heavy sway of a mesmerized pit lost in psychedelia at LA’s Whiskey a Go Go. And then it breaks. It breaks wide open. Lloyd’s guitar bays short and sparkling spittle, like sunshine sparsely streaming from the mouth of clouds, and the whole dance begins again anew.

“They just scratching the surface….”

“Prove It” is a perfect example of a sleeper track. The album’s most subtly impressive effort and deceptively simple song to boot, almost cliché in the Orbison-esque lead guitar of the verse and near-doo-wop drumming, “Prove It” shrouds its originality for effect, hiding behind tropes that are predictable and over-used but scratch at all of the itchy soft-spots on every music lover, appealing to history by revisiting it angularly, and just long enough to become an old shoe until it violently discards all notions of nostalgia with fiery, ultra-modern blasts of what Television, and its two guitarists, Verlaine and Lloyd, do best: rifling off history-changing guitar riffs with astonishing aplomb, while Verlaine, once an aspiring poet, plays bard, challenging what, lyrically, could possibly improve upon such a solid base. He proposes this:

The docks / The clocks / A whisper woke him up / The smell of water / Would resume.

Now the rose / It slows / You in such colorless clothes / Fantastic! You lose your sense of human. / Project. / Protect. / It’s warm and it’s calm and it’s perfect / It’s too “too too” / To put a finger on / This case is closed.

But outside of downtown New York, Television’s star never shone as bright as their peers.

“Some thought this was sad….”

And while Marquee Moon was, and is, still hailed by critics and included on nearly every “Best Of” list there is, it has never been close to commercially successful or as widely known and loved as, say, Talking Heads: 77 or Patti Smith’s Horses, perhaps because Television “had no decision” and were merely “trying to tell a vision”, but, for any reason, what surface they scratched would remain marred for time and the telling hoards of devoted listeners to take notice, albeit all-too-belatedly.

Like many artists, Television was before their time, frozen in the looking glass of a scene, so cool, self-aware, dedicated to its integrity and purity, patiently martyring for the good of their art, its rightful place in the elite and, for many, inimitable, untouchable, and irreplaceable amongst our favorite records.