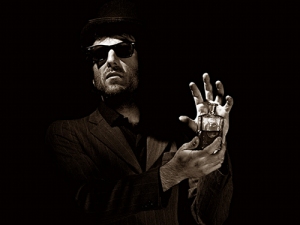 Brooklyn-based psychedelic pop musician Bryan Scary will release his third LP Daffy’s Elixir on NYC’s Paper Garden Records on April 24th. The album is a veritable mind-fuck that spans genres, breaks rules and tests its listeners unlike any release in recent memory. Those may sound like knocks, but I actually dig this release. The playful, operatic approach is theatrical and flamboyant in ways that immediately call to mind Queen’s most ambitious material. I played the hell out of Queen’s Greatest Hits as a kid, so Daffy’s Elixir serves as the welcome return of a forgotten friend. A video from Scary’s recent performance at BreakThru Radio is featured below. Scary is backed by a sizable cast of characters that his bold sound demands.  Watch their performance of “Ballroom Kid” here: