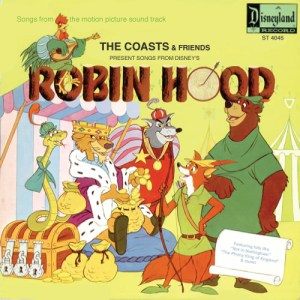 For children of the 1990s, there is one item that nearly every last person can relate to. It is not Teenage Mutant Ninja Turtles. It’s not snap bracelets, pogs, or Ghostbusters. It’s not even Nickelodeon or Nerf guns. No, the item that each and every kid around my age had while growing up was a shelf full of Disney VHS tapes. Those colorful, oversize, plastic videos were often the only guarantee our parents had in the battle to keep us entertained. Everyone had their favorite.

One tape that I watched so frequently that it nearly melted in my parents’ VCR, was Disney’s 1973 classic cartoon version of Robin Hood. This is why I leapt for joy upon my discovery that Thought on Tracks favorites The Coasts will be releasing an album covering the entirety of the Robin Hood soundtrack. In a few weeks, the album will be sent to anyone who purchased a digital download of the band’s self-titled, debut album from their Bandcamp page. The album is currently available for $5, a pittance considering the strength of the release.

Today, the band offered fans the initial track from the Robin Hood release. Below, you can stream The Coasts take on “Love.” The original was sung by Nancy Adams. It was written by Disney songwriting stalwarts Floyd Huddleston and George Bruns. Enjoy, and stay tuned to Thought on Tracks for more from this release. I know I won’t be able to refrain from posting The Coasts version of Roger Miller’s “Not in Nottingham,” whenever it arrives.