In the Dust #18: Lee “Scratch” Perry and His Best from The Black Ark

Once a week In The Dust rolls up its sleeves and digs to the back of the rack to find that record, the one you never knew you always wanted, the one that’s lost but not forgotten.

In honor of the 18th edition, a number that in Western culture signifies rebellion, independence, and the legal recognition of one’s voice, and its subject, a notorious iconoclast and viscerally subversive revolutionary, let us deviate from the usual formula.

I want to talk about Lee “Scratch” Perry, and I want to do it my way. I don’t want to refer to myself as the author, and I want to include a minimal amount of unbiased reportage, because as anyone who is familiar with Perry will tell you, he does what he wants, when he wants, how he wants. Damn everyone. Damn everything.

So I’m going to tell you, in my words, about the man, a legendary reggae artist and producer, his role in pioneering dub music, and my favorite cuts to ever emerge from The Black Ark.

Let me start by saying Lee “Scratch” Perry was, and is, batshit crazy. Refer to my blurb from 2011’s best reissues post for his album The Return of Pipecock Jackxon, but this isn’t really about his insanity, personal at least, although it is incredibly difficult to separate it.

He was born Rainford Hugh Perry in Kendal, Jamaica in 1936. When Perry was in his twenties, he began selling records for Clement Coxsone Dodd’s sound system.

This might require some translating. In Jamaica, music is not only sold through the likes of our traditional record stores, but through sound systems, rolling carts or cars equipped with turntables, power supplies, and an immense, jury-rigged wall of speakers designed to attend, or begin, street parties where the records played can then be sold. The record sellers of these sound systems are precursors to “selectors” or “controllers”, the reggae and dancehall equivalent to the radio or club DJ. The sound system itself is generally regarded as one of the most important elements in the development of Jamaican music, bringing a wild and seemingly ever-changing array of styles to the masses day-to-day.

So that is how Perry’s career in music began. As his relationship with Dodd developed, so did his job description. He became involved with Studio One, Dodd’s record label renown for its consistent generation of hit after hit. Perry slowly integrated himself into the recording process, rostering with Studio One, and ultimately cutting close to 30 sides. But Dodd and Perry, a unique mind, terribly stubborn and difficult to work with, soon began to chafe. Their personalities, as well as their expectations financially, did not mesh, a reoccurring problem that persists in many of Perry’s professional relationships to this day.

Perry jumped ship to join Joe Gibbs at Amalgamated Records but that didn’t last long either. Another financial dispute led Perry to subvert Gibbs and start his own Upsetter Records, an apt name that Perry would repurpose many times over.

Upsetter Records began as Perry’s vehicle for his own music and the cultivation of his own sound. The first Upsetter releases, 1968’s “People Funny Boy” and “I Am The Upsetter” were direct insults aimed at Gibbs, and proved not only effective, but also popular. “I Am The Upsetter” sold over 60,000 copies in Perry’s native Jamaica. Now known as “The Upsetter”, he and his studio band, named (guess what?) The Upsetters, would proceed to put out a string of extremely popular singles, in time signing with Trojan Records, a U.K. label, and using their distribution network to launch The Upsetters’ first full-length LP, Return of the Django, still one of their most highly regarded releases to date. 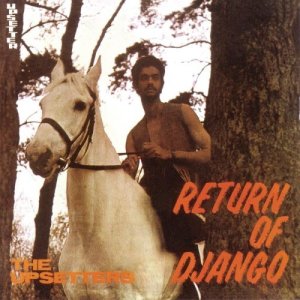 After the Django release, the label set it sights on outside artists, proceeding to record and release music by The Wailers and several early sides cut with the immortal Bob Marley. But The Wailers and Marley soon grew too big for Upsetter and left, signing to Island Records. Despite gloomy horizons brought on by the departure of the label’s biggest outside act, Perry pressed on, entering the most important and influential period of his career.

In 1973, he built the legendary Black Ark Studios. I get chills just thinking about it. No place in the history of reggae has ever sourced such mojo, with Treasure Isle with the indispensable King Tubby at the boards a close second.

Later recognized as a pioneer of dub for his experiments with Dodd and Gibbs in the early 60’s, Perry set out in The Ark to continue the very same free-spirited exploration of the boundaries of reggae, now with more control, very basic but personally selected equipment, and nothing but time and ganja.

His production palate expanded. His mixes became more experimental. Like King Tubby, Perry used the mixing board and external effects units, which due to budget and availability were very simple, as instruments, endlessly tweaking, and through what most critics refer to as astonishing, electronic sleight-of-hand creating from pre-recording tracks long, twisted and heady masterpieces, swathed in echo, reverb and punchy overdubbing, barely resembling any shred of the original. Using only a 4-track, Perry engineered remarkably dense musical landscapes that explored the definition of reggae and dub, rife with sounds previously unheard, concluding, in statement after landmark statement, that, perhaps, what people knew as reggae and dub was severely antiquated.

He buried microphones and banged on trees for bass drums. He surrounded drum kits with chicken wire. He famously sampled crying babies, bombs exploding, glass breaking and a multitude of animals, one of which, a cow, was not a cow at all, actually a saxophone played through a cardboard tube MacGyvered with tin foil. The old rules were exactly that: old, and no longer applicable, and Perry, in so many ways, began to invent his own. He blew ganja into running tape, sprayed it with blood, urine and alcohol, blessed his studio everyday with the customs of local magic and allowed candles and incense to burn onto everything, all in the name of The Black Ark:

The Black Ark and its music made people stars. Junior Murvin, The Congos, Marley and The Wailers, Max Romeo, The Heptones, Augustus Pablo, Wings (yes, Paul McCartney’s Wings) and so many more cut tracks behind its dark doors.

But, in classic Perry style, he covered every surface of The Ark with unintelligible imagery and prose and proceeded to burn it down. Perry insisted that it was infested with “unclean spirits” (frequent unwanted patrons and visitors), and burnt the studio to cleanse himself of his sins.

Too much stress in Jamaica, all the time. Everybody want money, everybody want paid. Everyone got problem and want me to solve their problem. Nobody gave me anything, people just took everything. Everybody take this, and take that. So the atmosphere in the Black Ark studio was changing; it wasn’t like it used to be. Then I decided to make a sacrifice as the energy wasn’t good anymore.

There is some dispute about when the fire actually occurred. It was sometime between 1979-1983. Some say it was a construction accident. Others say it was to avoid greedy gangsters getting a cut, but no matter how or when the studio actually burnt down, its destruction ended the most important creative period in the history of reggae and dub music.

But while The Ark is dead, its music survives, and thank God, for it is some of the most addictive, impressive, and delightfully insane music there is.

These are 10 just ten examples of the genius marriage that was Perry and his Black Ark. Listen to Ben’s picks on this Spotify playlist: In the Dust: Top 10 Songs from the Black Ark

This song is all about tone. Perry deftly renders this song into a soft, rounded transcendence. Marley and The Wailers do the rest.

The Upsetters – Return of Django

Good God Almighty, the brass! This groove is so deep and funky I have to believe it was written for the soul purpose of dubbing, but that’s not to say that the original won’t rock every bone out of your body. Grab a really, really big glass of rum and dance with someone, anyone.

The infamous baby: one particularly impressive example of Perry’s work with samples. Notice the baby seems to wail on beat, syncopating the rhythm, funking everything up into a sort of sly, groovy lean? That’s why he’s the master.

The lead guitar, incessant but hardly obnoxious rim-shots, and Perry’s masterful vocal pattern all collide to establish a solid, cutting rocksteady beat that, for my dime, typifies the best qualities a top-notch reggae rhythm section can bring to a track.

Eli Cash, anyone? Maybe The Clash rings a bell? Big money says virtually everyone has already heard this song at least once, but for me a million times wouldn’t be enough. Junior Murvin’s voice is like a bubble bath, and the way Perry EQs and modulates the hi-hats on all of Murvin’s material is, as a drummer, what I will always hear when someone says “reggae”.

The Congos – Don’t Blame It On I

The best vocal group in the history of reggae. There. I said it. Listen to this song, go buy Heart of the Congos (also produced by Perry at Black Ark) and if you still don’t agree, come find me. Rob knows where I live.

Max Romeo, perhaps more than any of these artists, is someone I wish could include at least ten times on his own. He isn’t as instantly infectious as the others on this list, but that’s not why I love him. His tracks are sleepers, burrowing ever-deeper, without attracting much, if any, attention, until they grow large enough to eclipse tracks you initially thought were obvious, eternal standouts. Often revolving around the subject of Satan and his influence on the Jamaican people, Romeo’s music establishes itself as some of the most substantial material to ever emerge from The Black Ark.

Augustus Pablo is, to many, the king of roots reggae. Recording almost exclusively instrumental dubs, and pioneering the use of the melodica, Pablo’s mysterious and silky style exhibits an intense focus not often seen in the work of the characteristically loose roots period. And the Mayor of Portlandia loves him.

The Upsetters – Life Is Not Easy Dub

The only Upsetter dub on the list features the fake saxophone-cow. Exploring the cacophonous, unfathomably dense depths of Perry’s dub oeuvre is something one should wait to do until after fully digesting the singles.

You might just lose your mind. Or find it.