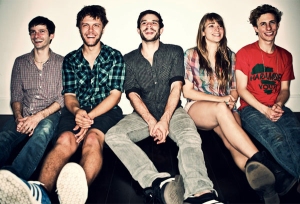 Tonight, GIVERS will hit Indianapolis as support for Dr. Dog. The two bands will take the stage at Deluxe, a new venue within The Old National Centre. Yesterday, GIVERS released a video featuring some footage from their current tour. The video, that you can find below, has been cleverly edited to mimic the legendary intro to television’s The Wonder Years. Take a trip down memory lane to the land of Kevin Arnold and Whinnie Cooper.

Tonight’s show is one of my most anticipated of the spring. Dr. Dog’s new album Be the Void kicks some serious ass. It has been a few since I have seen Philly’s finest, and am expecting big things. GIVERS debut release was one that I latched on to in 2011 (See: Review). We were offered ample live footage from a variety of video blogs last year, which leads me to believe that they will be even better in person. There are still tickets available for tonight’s show. Grab yours via MOKB Presents. This ain’t one you will want to miss.