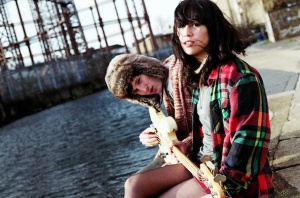 U.K. export Yuck proved to be one of 2011’s breakout stars. Critics gushed over their self-titled release. Their signature fuzz garnered praise from seemingly every corner of the indie blogosphere. Rather than make an immediate and likely lucrative return to the studio, Yuck’s members appear content to allow their minds to drift for a bit at the start of 2012. We have featured lead singer Daniel Blumberg’s side project Oupa a couple of times (SEE: “It’s Rough” and “Backwords“). This time around, we find the band’s bassist, indie vixen Mariko Doi, stepping out with her own side project Parakeet. Yesterday, the band dropped a video for their debut single, “Tomorrow.” The results can be found below. Parakeet is pressing a limited edition 7″ vinyl featuring “Tomorrow” and another track entitled “Paper, Scissors, Stone.” Those interested in that sort of thing had better act fast, as only 500 copies will be issued. Grab yours HERE.